Bellamkonda Sreenivas had a decent start with his first two films. Now he joined his hands with Boyapati Srinu to bring another mass masala action entertainer. The trailer says it all with the action sequences and the powerful punch dialogues. Bellamkonda Sreenevas is shown as a lover boy as well as powerful character who play with his enemies. The film has got a U/A certificate and its runtime is 2 hours 29 minutes.The movie revolves around Eve teasing and Rakul Preet falls in love with him after knowing everything about him. 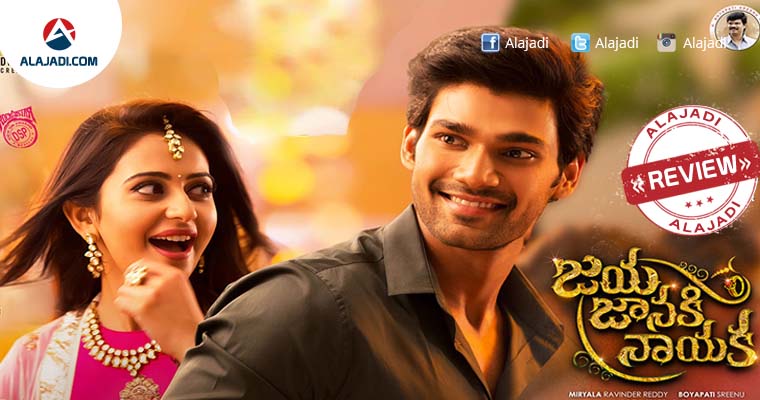 Businessman Chakravarthi (Sarath Kumar) has two sons. One is Nandu (Nandu) and another one is Gagan (Sai Srinivas). The trio looks more like friends than father and sons. Unexpectedly, Gagan meets Sweety (Rakul Preet Singh) and falls in love with her. She also loves him and the duo decides to get married. But Ashwith Narayana (Jagapathi Babu) plans to make Sweety marriage with his son. After knowing the news, Gagan goes into depression. But a person named Power kills Sweety’s husband. Then Gagan decides to take revenge on that person. The rest of the story forms with the elements, who is Power? What is the rivalry between Power and Varma? What happens to sweety at the end? To know all these details, one need to watch the movie.

The plot of this movie is a guy who decides to take revenge on villains, who kills the husband of his lover. The first half is completely filled with love and romantic sequences, family introductions and few action elements. The original story starts from the second half. The movie is a rollercoaster with a lot of emotional sequences. Bellamkonda Srinivas will be seen in two different shades. One as a lover and another one as a person who seeks revenge. Bellamkonda did a great job and improved a lot from his previous films. Rakul Preet Singh impressed the audience with her amazing performance. The one particular scene, when she lost her husband and comes back to Gagan will definitely make the audience cry. Jagapathi Babu once again showed his stamina in a negative role. He did complete justice to that role. Sarath Kumar, Vani Vishwanath, Pragya Jaiswal and Nandu also impressed the audience with their performance. Catherine’s special song is one of the highlights of this movie. Overall the film is a one time watch.

Bellamkonda Sai Srinivas: The actor improved a lot in terms of dialogue delivery and performance but he should still work on his acting especially during the emotional scenes.

Rakul Preet Singh: She is an amazing performer and she has got an impressive role in the film too.

Pragya Jaiswal: She is also seen playing the secondary lead and both the heroines are at their best with the glamour and performances.

There are a bunch of senior actors in the film whose presence added a lot of strength. Sharath Kumar, Jagapathi Babu, Tarun Arora and others are good in their roles.

Boyapati once again bagged success in the form of Jaya Janaki Nayaka. Though they are few ups and downs in the story, the way he presented it is fantastic. His presentation and portrayal of mass sequences are top notches. Devi Sri Prasad music elevates the story in many sequences. Editing and cinematography need special mention. The production values are good. The songs which were shoot in rich locations were entertaining.