Boyapati is known for mass action films which contain high octane action sequences..  heroism elevation scenes. But he has surprised everybody with his latest film ‘Jaya Janaki Nayaka’ promos. By looking at the posters & first teaser, everybody felt that Boyapati is doing something different than the usual. But here is the second teaser of ‘Jaya Janaki Nayaka’ with Boyapati mark action. For all those who thought of missing Boyapati mark action entertainment in JJN first teaser will surely get impressed with this complete action filled second teaser. 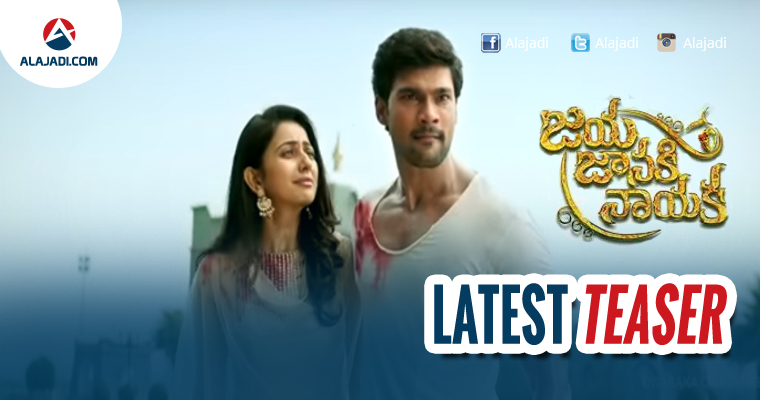 The 54 second teaser gives us a glimpse of story the film.  Boyapti appears to have choosen love as his central theme with well knit action sequences around it.  This teaser gave a sigh of relief to his fans as he has shown Bellamkonda Srinivas in a powerful action mode.  Srinivas is seen running parallelly with a jeep on a beach.. he is taking on dozens of goons with a single punch.. what not.. the teaser has everything one expects from Boyapati film.   The 54 seconds teaser has concentrated more on elevation of Bellamkonda Sai heroism to win his lady love Rakul Preet Singh.

Even though Rakul Preet Singh is shown in the second teaser, Boyapati didn’t show second heroine Pragya. Rishi Punjabi’s cinematography, Devi Sri Prasad’s background score are worth mentioning. Boyapati seems to have focused on perfect youthful theme of romance and a full fledged commercial script with his mark of entertainment. True to essence in JJN title, the one who triumphs on Janaki love is the true winner.