Vishnu Manchu has teamed up with his lucky mascot, director G Nageshwar Reddy, once again for a hilarious comedy entertainer titled Achari America Yatra. The film was launched on March 18th at morning in Tirupati, coinciding Mohan Babu’s birthday. After Luckkunodu, actor Vishnu Manchu is now keen on coming back to his lucky genre, that is comedy. It can either tell us what are the characters are going to be like or it would either tell us about the genre of the film, if not anything it would at least make us think what the film is and how is going to be? 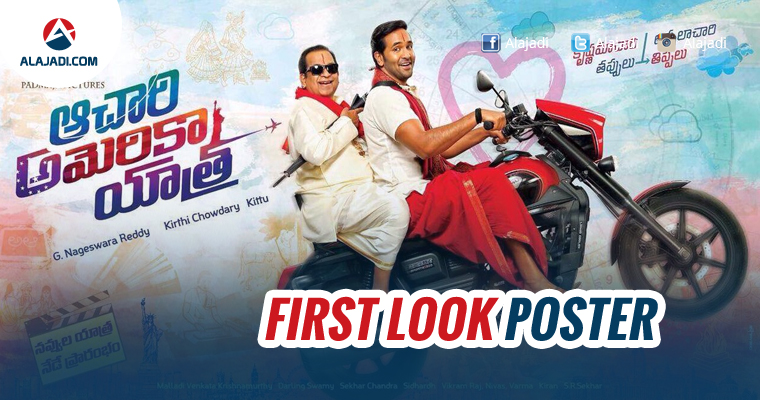 Veteran director K Raghavendra Rao directed the first shot, with noted politician and industrialist T Subbiramireddy giving the honorary clap and Raghu Rama Krishnam Raju switching on the camera. Amyra Dastur is said to be in talks to play the female lead’s role.  Padmaja Pictures banner is bankrolling the movie. Sekhar Chandra is composing the tunes.

The makers of it have released the first look of ‘Krishnamachari’ and ‘Appalachari’ from the movie which is yet to bring on board the key cast and crew. With an interesting tagline that reads- ‘Krishnamachari thappulu, Appalachari Tippalu’. The poster looks hilarious where we see Vishnu riding the bike have Brahmanadam behind him. Earlier the combination of these two actors in films like Dhee, Denikaina Ready and Doosukeltha was terrific. We just couldn’t stop laughing. Guessing that this film will also entertain us to the fullest.