At age 11, Agastya Jaiswal of Hyderabad is already making news headlines as a “child prodigy”. The boy has managed to pass the Class XII senior secondary school examinations at least six years ahead of schedule. He passed Intermediate Second Year Examination with 63 percent as many as 6 years before the normal schedule. He is the first in the Telangana State to have done it at such a young age. Agastya appeared for the examination at Chaitanya Junior College in Jubilee Hills in March this year. He choose Civics, Economics and Commerce as his subjects. 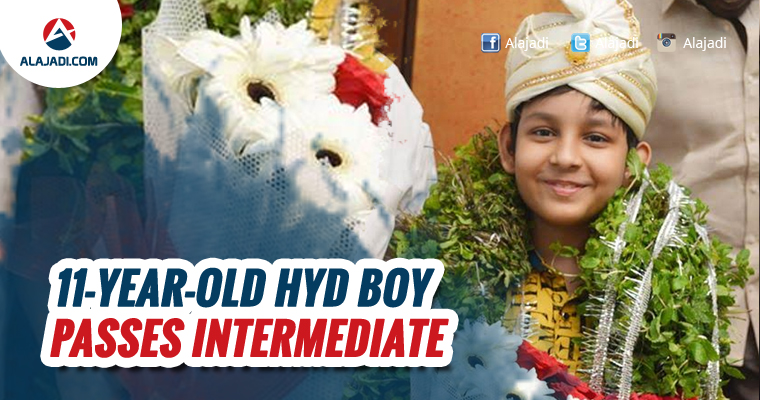 Agastya Jaiswal’s father Ashwani Kumar said he passed the intermediate second year examination with 63 per cent. He claimed his son is the first person in the state to have passed the examination at such a young age. He is a student of St Mary’s Junior College, Yousufguda, and appeared for the exam in March this year. The results of the exam were announced on Sunday.

Agastya cleared the SSC examination at the age of nine in 2015, and had then taken permission from the Telangana SSC Board to appear for the exam, Mr Kumar said. But no such special permission is needed to appear for intermediate examination, he said.  Agastya want to do his graduation in commerce in the next three years but his ultimate goal is to be a doctor.  After he completes BCom, he will repeat intermediate “…but with biology, physics and chemistry. I will then write medical entrance exam and get a seat in an MBBS course, he said.

Agastya needs to be back in junior college also because he has to be at least 17, the average age at which a student passes Class 12, to sit the test to get into a medical college. And, he doesn’t want to waste time. “I don’t want to sit idle and want to go ahead with BCom,” said Agastya, who was all of eight when he passed Class 10. He took a “gap year” before enrolling for intermediate. Even Agastya’s Elder Sister Naina Jaiswal has done many such feats. She cleared SSC at the age of 10, Intermediate by 12, Graduation & Journalism by 13, Post Graduation by 15 and Phd by 16. She is also an International Table Tennis Player.