The upcoming movie of actor Vishal after Getting a decent hit with the movie Madha Gaja Raja is Kathi Sandai. The movie makers of this upcoming Kollywood movie are going to release the movie in Telugu as well and the Telugu version is titled as Okkadochadu. The movie makers had released the official trailer of Telugu version Okkadochadu on youtube now. 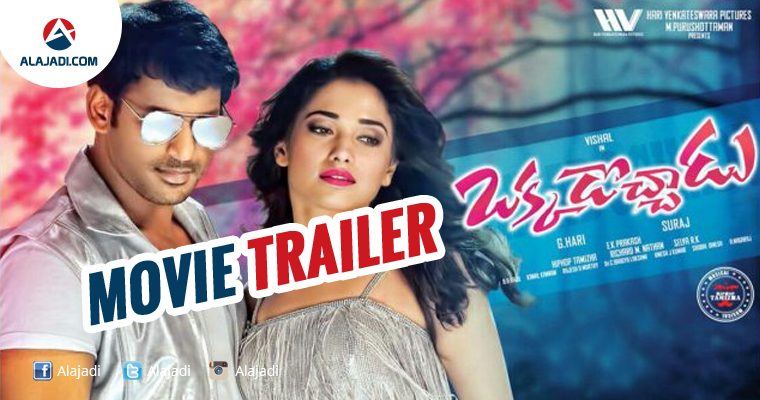 Vishal is one of the top Tamil Heros who had also got huge fan base in Telugu states as well. He had acted in the Telugu movies like Pandem Kodi and Salute which had got impressive response from the Tollywood audience. At present the actor is busy with the shooting of his upcoming movie titled Kaththi Sandai.which is touted to be a Tamil action masala movie.

The flick is bankrolled by Vishal and S Nandagopal under the production house Madras Enterprises in Tamil and the movie is distributed in Telugu by Hari Venkateswara Pictures by M Purushottam. The movie is scheduled for a grand release for November 18, 2016. The female lead role in the movie is played by Tamannah. The music for the flick is tuned by Hiphop Tamizha. The flick also features Tarun Arora, Vadivelu, Jagapati Babu, Soori, Jayaprakash and Aarthi in supportive roles. Richard M Nathan is the cinematographer of the flick.

Okkadochaadu is about a common man who will raise his voice and do equity to the people surrounding him. The film is bundled with utmost commercial elements like romance, action and entertainment. Jagapathi Babu role will have a major impact on the film whereas Tarun Arora is going to be the antagonist. Producer Hari said the movie is biggest budgeted one in Vishal’s career. “We have shot a single chase sequence with Rs.1.5 Cr and another Rs 1 cr was spent for filming a song. The film will have rich production values and high technical support,” Hari said.