The most awaited film of Vishal and Tamannah starrer is all set to release 23rd December 2016. Okkadochadu is an action masala film which is written and directed by Suraj and produced by S. Nanthagopal under his Madras Enterprises.  The mass actioner also features Tollywood actor Jagapathi Babu playing as baddie role. After lang gap Comedian Vadiveku comeback with Okkadochadu film with his mark of comedy style. Music is composed by Hiphop Tamizha. 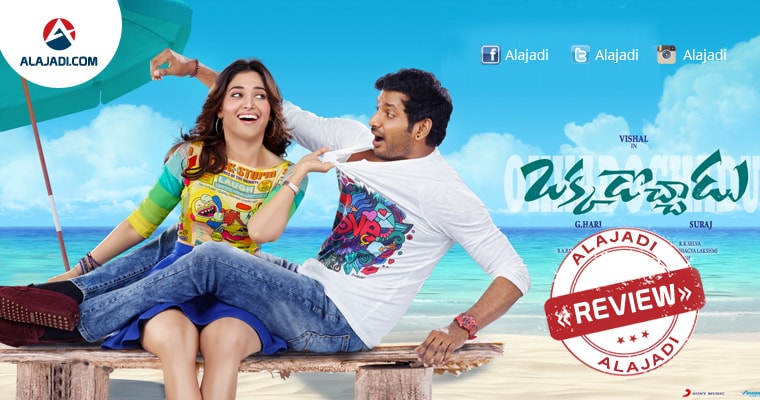 The story of Okkadochadu revolves around corruption and black money. Arjun played by Vishal is a cool guy with no goals and aspirations in life. Vishal falls in love with Tamannaah. As the story moves on they fall in many troubles. Jagapathi Babu plays a role of a police and is the antagonist of the film. Vishal is seen in 2 variations in the movie. The contrast of his characters in the first and the second half is remarkable. The movie sends a strong message to the society on black money and corruption.

Okkadochadu is the same old story in the same old bottle. There is not much to keep you engaged and the social message in the end seems forced. : If you are looking for pakka mass entertainer Okkadochadu is right pick for you. Vishal and Vadivelu combo scenes will entertains you through out second half. The film  made with comedy and mass action which is came out well.

Vishal: He portrayed his characters very well. His character in the first half is different than in the second part.

Tamannah: Her screen presence and stunning visuals added plus point for the movie.

And and other supporting actors performed well. The action scenes and the dance moves by the cast of the film need a special mention for their scintillating performance.

Okkadochadu is a mass entertainer. The comedy, music and the fight scenes were synchronized well. Apart from perfect cinematography and screenplay, the lead characters have done a great job in enacting their roles. HipHop Tamizha’s music has come to be a big asset for the film. The audience would certainly be overwhelmed by the message in the movie. Though the film is touted to be a Tamil-Telugu bilingual, there is an overwhelming Tamil influence everywhere right from the mannerisms to the atmosphere.