Two children – a toddler and a teenager – who had gone to the Bhopal Central Jail to visit their relatives during Raksha Bandhan were stamped on their faces by the authorities. The incident has infuriated human rights activists, with the Madhya Pradesh Human Rights Commission (MPHRC) seeking a report from the Director General of prisons.

The stamp read ‘Kendriya Karagar Bhopal, Raksha Bandhan Parv’ and has the date of the day of the visit. MPHRC has taken suo moto cognizance of the incident and order immediate compensation of Rs 10,000 each to the two kids. It termed the act as ‘inhuman’. The officials said that the children’s faces were stamped to apparently distinguish them from kids of women inmates, ensure that they do not enter again and also make sure that inmates do not leave the premises posing as visitors. 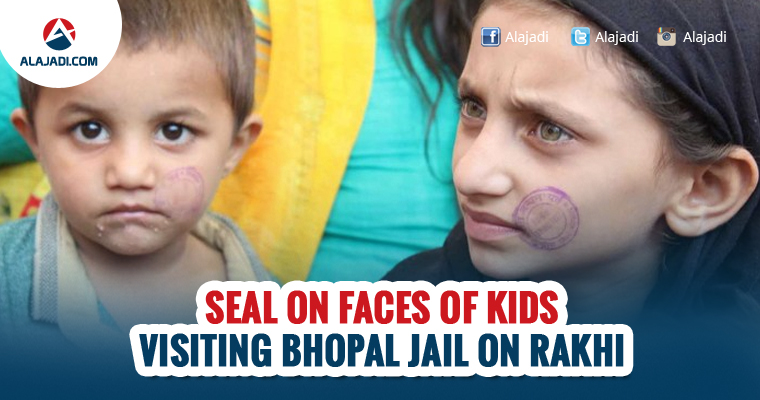 A jail officer said that there were 85,000 visitors on the day of Rakhi (Monday). The stamp is usually put on the hands of the visitors and an inquiry is being conducted on the reason for stamping the two children’s faces. The senior officials tried to defend the jail staff. “The stamping on only two children could be due to a mistake,” said a senior prisons official, refusing to explain how two kids would have the stamp at the exact spot “by mistake”.

Jail Minister Kusum Mehdele said, “Action will be taken against the guard responsible only if it is found that the identity mark was put deliberately…. They are not criminals, and branding by mistake does not make them so. Jail Minister Mehdele added that she has ordered an inquiry and asked DGP-prisons Sanjay Chaudhary to submit the report in three days. Strong actions will be taken against those responsible for it, she said.

MPHRC has asked for a report from DGP Chaudhary in a week. “This is against human values. Putting seals on the face of children is like a mental harassment for them. It is a violation of their human rights. The commission has asked to immediately stop the practice of stamping seals on people coming to meet relatives in jail,” said an MPHRC statement. The community staunchly condemns the act of marking the two children’s faces with jail stamps. Marked as family members of prisoners might pose the threat of social discrimination and done on a festive day makes one wonder the problems they might have faced while moving around in public.