Telangana State Deputy Chief Minister Kadiyam Srihari Collapsed During His Speech at Warangal This Morning. Kadiyam Srihari participated in the Telangana Formation Day Celebrations was addressing the people on the occasion but all of sudden he fainted. His Security Personnel immediately took him into his car where he recovered after some rest and first aid. He was Immediately shifted into his vehicle to rush ed to near by hospital. However, the doctors present at the spot provided him primary treatment for sun stroke and he came back to conscious. He then came back to the dias and finished his speech much to the relief of everyone. 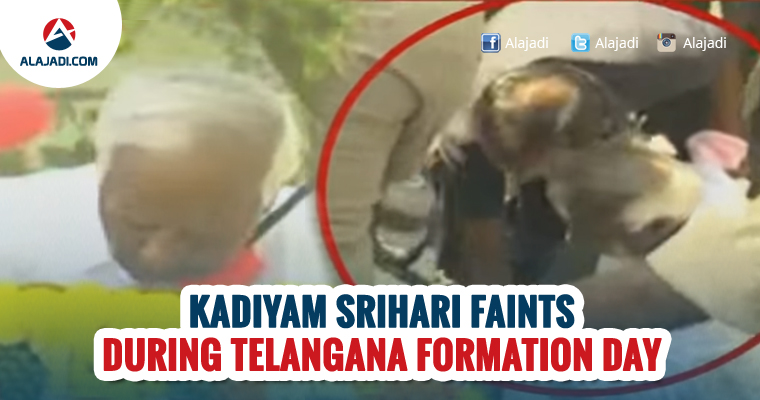 As the state is gearing up for the third anniversary celebrations, Minister for tourism and culture Azmeera Chandulal informed that the Telangana government has released Rs 15 crore to the districts to organise celebrations for the three day fete. Chief Minister KCR will unfurl the national flag and present cash awards of Rs. 1 lakh to 52 eminent persons from different fields at the hour-long programme which will also be addressed by him.

A three-day carnival will begin with a hoard of cultural programmes, including classical dance, Kavi Sammelan, Qawwali, Jaya Jaya He Telangana, Sufi music, Perini Dance, ghazals and others will be conducted at Ravindra Bharathi. A Telangana Food Festival is also planned to be organised at the People’s Plaza.

Kadiyam Srihari started his career as manager of Syndicate Bank in Nizamabad where he worked for two years from 1975-77. He then worked as a junior lecturer for the next 10 years from 1977 to 1987. In 1987, Srihari joined politics after he was asked by Nandamuri Taraka Rama Rao to join the Telugu Desam Party (TDP). It was in 1994 when Srihari won a seat as a MLA from Station Ghanpur constituency. While serving in the Rao government, Srihari also handled portfolios of Marketing, Social Welfare, Education and Irrigation in the Cabinets of Rao. Srihari resigned from the TDP at Warangal citing the party’s ambivalent stand on the Telangana statehood issue. He then joined the TRS which supported the statehood of Telangana. On June 11, 2015, the deputy chief minister resigned as the Member Parliament when he was offered a place in the Telangana cabinet.