Anguished over the increasing of two-wheeler accidents across the country, Nizamabad MP Kalvakuntla Kavitha today kick started an online social media campaign”Sisters for Change-Gift a Helmet to brother” on Rakhi day. Ms Kavitha, who started her online campaign for “safety of brothers” on the occasion of her brother and Minister K T Rama Rao’s birthday yesterday, appealed to all sisters in the country to tie rakhi and gift a ‘Helmet’ to their brothers and set a new trend. 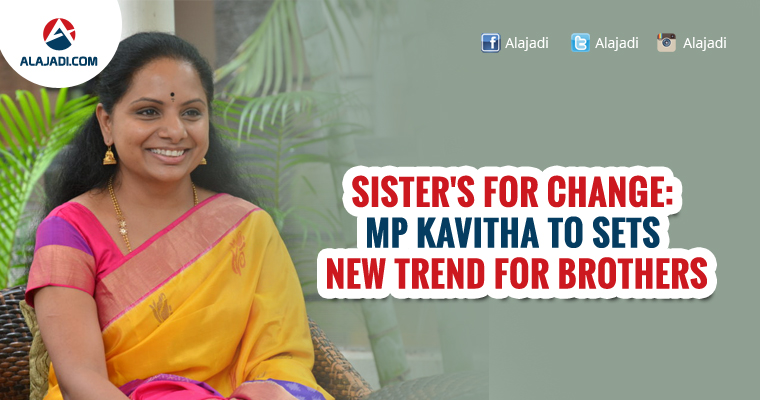 In view of the deaths of almost 400 two-wheeler riders every day in road accidents across the country due to non-wearing of helmet , the 39-year-old Kavitha, the daughter of Telangana Chief Minister K Chandrashekhar Rao, has started the campaign for sisters to safeguard their brothers. I would like to make a serious effort two save some lives. JoinMe #Sisters4Change # GiftAHelmet, she tweeted.

Let’s join hands for our brothers safety. Set a new trend this rakhi day : Gift your brother a Helmet,”she also tweeted. Kavitha also tweeted ” it is need of hour to safeguard our brothers and ‘rewrite the tradition’ by gifting them a helmet on this Rakhi day. The number of deaths in two wheeler accidents are much higher than the terrorist attacks.

Campaign, which right now started through Twitter and FB, is getting immense support from public on social media as Shuttler’s Jwala gutta and Saina Nehwal too are in support of the campaign ” Sistersforchange”.