Akshay Kumar is back with another social message oriented film to give for the audience. The movie has so many things which a normal person can learn. The traditions and other things should not be the final verdicts of a person’s life can be seen in the film. Even, PM Modi has tweeted about the film which promotes Swachch Bharat. Kumar has discovered a unique brand of cinema that’s patriotic, commercial and totally consumable for traditional Indian families. His new film Toilet Ek Prem Katha is another film that perfectly blends all these aspects. 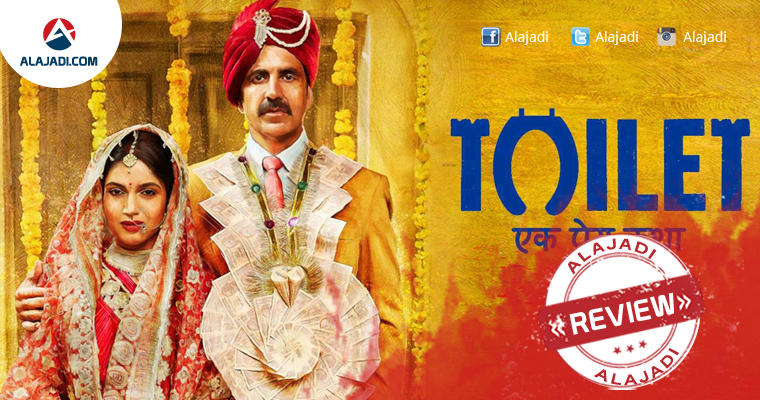 Toilet – Ek Prem Katha traces the love story between ‘jugadbaaz’ Keshav (Akshay Kumar) and progressive girl Jaya (Bhumi Pednekar), set in two villages near Mathura. TEPK is a satirical take on a battle against the age old tradition of open defecation in the country. Jaya, who leaves her husband Keshava  on the first day of their marriage after discovering that he doesn’t have a toilet. How Keshava desperately sets out on a mission to win back his love by standing up to the age-old traditions and values of India forms the crux of the story.

Akshay Kumar: He has delivered a wonderful performance and comedy arises from his acting in Toilet: Ek Prem Katha.

Bhumi Pednekar: She has done justice to her role and her chemistry with Akki is the highlight of the film.

Toilet: Ek Prem Katha (English: Toilet – A Love Story) is an upcoming Hindi-language film directed by Shree Narayan Singh. Co-produced by Akshay Kumar and Neeraj Pandey, the film will star Akshay Kumar and Bhumi Pednekar in the lead roles, with Anupam Kher and Sana Khan in supporting roles. Toilet: Ek Prem Katha has good production values and background, picturisation and dialogues are the attractions on the technical front. he film is written by Siddharth Singh and Garima Wahal, the writers of the 2013 Hindi film Goliyon Ki Raasleela Ram-Leela, and shares some similarities with a true event in which 19-year old Priyanka Bharti fled her husband’s home in 2012, when there was no toilet.