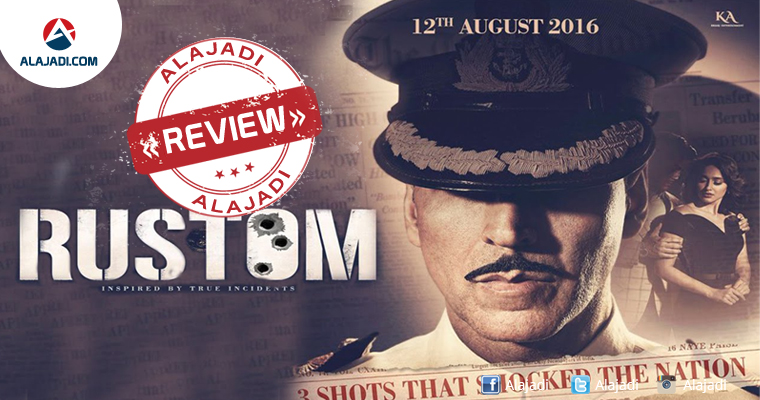 For Akshay Kumar fans, Rustom is bound to be a full-on treat. The courtroom drama is scripted, crafted and geared to give the lead actor all the space that he needs in order to own the project.  The star of the show proves equal to the task. Unfortunately, Rustom, which fictionalizes the sensational true story of naval officer Kawas Manekshaw Nanavati, comes nowhere near becoming an irresistible cinematic account of a murder trial.

Rustom Pavri (Akshay Kumar), an honourable officer of the Indian Navy shoots his friend Vikram (Arjan Bajwa) to death after discovering that his wife Cynthia (Ileana D’Cruz) had an affair with the rich businessman. The Commander surrenders himself to the Police immediately and admits to have killed Vikram but pleads ‘not guilty’ in court. Is he convicted or acquitted?

Rustom has a cracker of a beginning. Without wasting any time, the director comes straight to the point. He takes us quickly through the circumstances in which Rustom shoots Vikram and the trial begins.

Akshay Kumar: His new avatar has really impressed the audience, who say he has reinvented himself with “Rustom” ‎once again after “Special 26” and “‎Baby.” He has delivered brilliant performance, which is the main highlight of the movie.

Ileana D’Cruz: She has done justice to her role and her scintillating moments with Akshay Kumar are among the highlights of the film.
Nadkarni, Sachin Khedekar, Kumud Mishra and Pawan Malhotra have played important roles and their performances are also assets to the movie.

Brilliant script, good songs and background score, amazing picturisation and superb selection of exotic locales and warships are the big attractions on the technical front. There is attention to detail in the sets and Rustom feels like a delicious film from the era it represents. First-time director Tinu Suresh Desai does a good job, and the editing between shots is decent.