The Telangana police in a pre-dawn crackdown on Telangana Joint Action Committee, arrested the TJAC chairman Prof M Kodandaramand several other TJAC members. The TJAC was gearing up to hold a rally followed by a public meeting here in the city on Wednesday demanding that the state government keep its promise of filling more than a lakh vacancies in several government departments. As many as 12,000 police personnel were on duty Today. Sundarayya Vignana Kendram which is being chosen as the venue for the dharna is now under the control of cops. 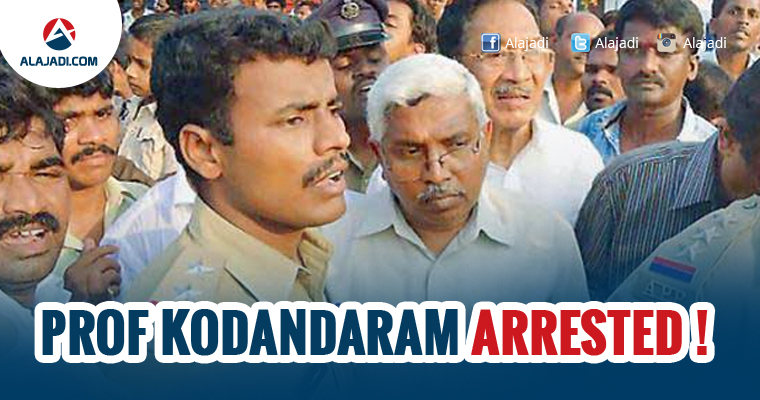 East Zone DCP Ravinder, Taskforce DCP Limba Reddy and their team have surrounded Kodandaram’s house in Tarnaka on early Wednesday and have taken Kodandaram into custody. Reportedly, the doors of Kodandaram’s house were broken and he was forcibly taken into the custody. The TJAC was gearing up to hold a rally in favour of unemployed youth demanding state government to fill the vacancies in several government departments. Apparently, there are more than a lakh vacancies in various government departments.

Although the permission to the rally and meeting have been denied by police department earlier, Kodandaram had challenged to go ahead and conduct meeting, rally. Police have reportedly taken TJAC members from various other districts into their custody. They pledged to stage protest in the police stations itself accusing State Government of not filling over 1 lakh vacancies in the Government.