How the tech world responded to Trump’s immigration ban

President Donald Trump signed an executive order on Friday that temporarily halted the admission of refugees, indefinitely banned the admission of refugees from Syria, and stopped citizens of several Muslim-majority countries from entering the U.S. The American Civil Liberties Union has already filed a legal challenge to the order. The order is so sweeping that it also includes any green card and visa holders from these countries. So if you were a citizen of these countries (Iran, Iraq, Syria and Sudan. Libya, Yemen and Somalia) and had the bad luck of being outside of the U.S. at the time the order went into effect, you’re now barred from entering the country for at least the next 90 days. Unsurprisingly, that’s already affecting the employees of many of the largest tech companies, which tend to draw from a global talent pool. 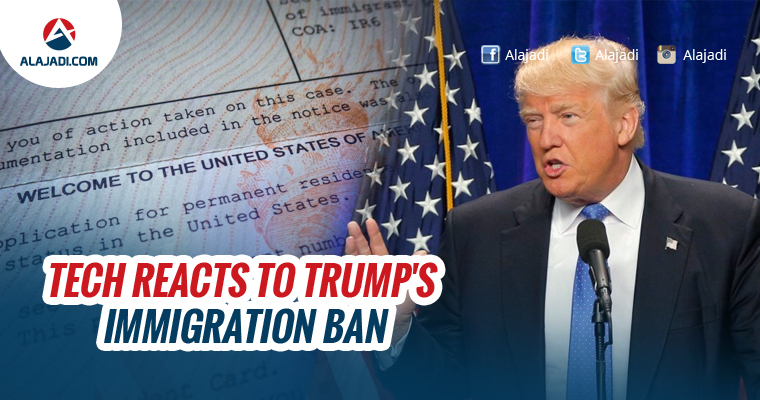 Here is a rundown of their statements:

Facebook founder and CEO Mark Zuckerberg, too, yesterday noted in a Facebook post that he is “concerned about the impact of the recent executive orders signed by President Trump” though he also added that he was “glad” that Trump was willing “to ‘work something out’ for Dreamers” and that the President “believes our country should continue to benefit from people of great talent coming into the country. We are assessing the impact on our workforce and determining how best to protect our people and their families from any adverse effects.”

Microsoft told us that it is already providing legal assistance to its employees affected by this: “We share the concerns about the impact of the executive order on our employees from the listed countries, all of whom have been in the United States lawfully, and we’re actively working with them to provide legal advice and assistance.”

Microsoft CEO Satya Nadella spoke out in favor of immigration in a post on LinkedIn. “As an immigrant and as a CEO, I’ve both experienced and seen the positive impact that immigration has on our company, for the country, and for the world. We will continue to advocate on this important topic,” Nadella said.

Nadella also shared a memo from Microsoft’s chief legal officer Brad Smith, in which Smith revealed that at least 76 Microsoft employees are affected by Trump’s order. “But there may be other employees from these countries who have U.S. green cards rather than a visa who may be affected, and there may be family members from these countries that we haven’t yet reached,” Smith added. Smith said he and Nadella would answer employee questions during a question-and-answer session on Monday.

LinkedIn CEO Jeff Weiner noted that many Fortune 500 companies are founded by immigrants or their children, and wrote, “All ethnicity should have access to opportunity  founding principle of U.S.” (LinkedIn was acquired by Microsoft last year.)

Apple CEO Tim Cook says the company has reached out to employees affected by the order. “In my conversations with officials here in Washington this week, I’ve made it clear that Apple believes deeply in the importance of immigration — both to our company and to our nation’s future,” Cook wrote. “Apple would not exist without immigration, let alone thrive and innovate the way we do.”

Uber CEO Travis Kalanick sent an email to his team on Saturday afternoon, noting that the order affected about “a dozen or so employees.” He also added that the company will identify and compensate drivers who may be barred from entering the US for the next 90 days pro bono “to help mitigate some of the financial stress and complications with supporting their families and putting food on the table.” It’s unclear how long it will take for Uber to identify these drivers, though. As a member of Trump’s business advisory group, Kalanick will meet with Trump next week.

Adobe CEO Shantanu Narayen, in a message to all employees, said that “as an immigrant, US citizen and CEO, I am deeply concerned about the impact of the recent executive order restricting entry into the United States for nationals of seven countries, and I know many of you are as well.”

Oracle has yet to respond to questions about how Trump’s executive order will impact its business. We will update this post as we receive more comments and statements. It’s worth noting that a number of other tech CEOs and luminaries have also been outspoken about the ban.