This Syrian Boy is Pulled From Air Strike Rubble.

The true cost of the bloodshed can frequently be overlooked. And sometimes an image reminds us of the horror of it all. His name is Omran Daqneesh. The image of him, bloodied and covered with dust, sitting silently in an ambulance awaiting help, is another stark reminder of the toll of the war in Syria. 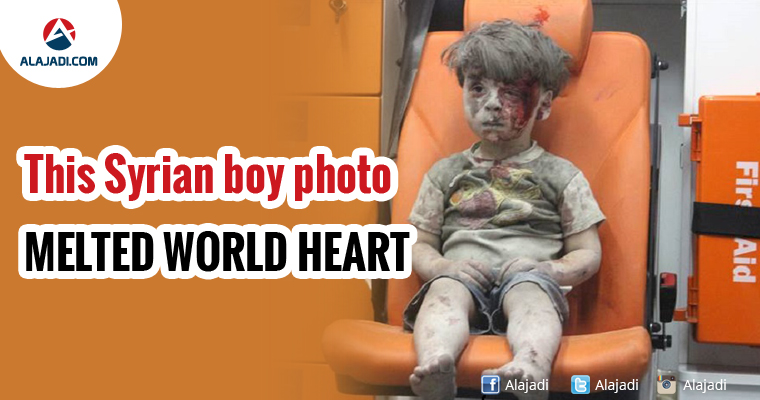 The boy, who was only mildly injured, is putting a face on the tragedy that is the Syrian Civil War now in its fifth year that has claimed the lives of an estimated 400,000 people. Most recently, the city and province of Aleppo has seen the brunt of fighting between forces of Assad’s military and rebels looking to oust the strongman.

Omran was rescued along with his three siblings, ages 1, 6, and 11, and his mother and father from the rubble of their partially destroyed apartment building. None sustained major injuries, but the building collapsed one hour after the family was rescued.

Aleppo Media Centre in the rebel-held al-Qaterchi neighbourhood of the besieged Syrian city last night, it shows five-year-old Omran Daqneesh being lifted out of the rubble of a building that was bombed by an airstrike. As he is whisked to a waiting ambulance by first-responders, you will find it hard to ignore his cartoon character T-shirt that is caked in dust and the left side of his face that is covered in blood.

Now a heartbreaking video is reminding us all over again of the horrors of war and its toll on innocent lives.

Photos and video of the little boy went viral after being taken on Wednesday night, with people around the world expressing their horror at what is unfolding in Syria each day. They were taken to the M10 hospital and Omran has since been discharged.