A youth who had gone to withdraw Rs 8000 from an SBI ATM in Sangam Vihar was in for a shock when the Rs 2000 notes from the machine bore the mark of Children Bank of India. A case was registered based on the youth’s complaint at the local police station. As Rohit Kumar played Spot The Difference, right there at the ATM of the government-run SBI or State Bank of India, at least nine more deviations emerged in the cleverly-produced fakes. 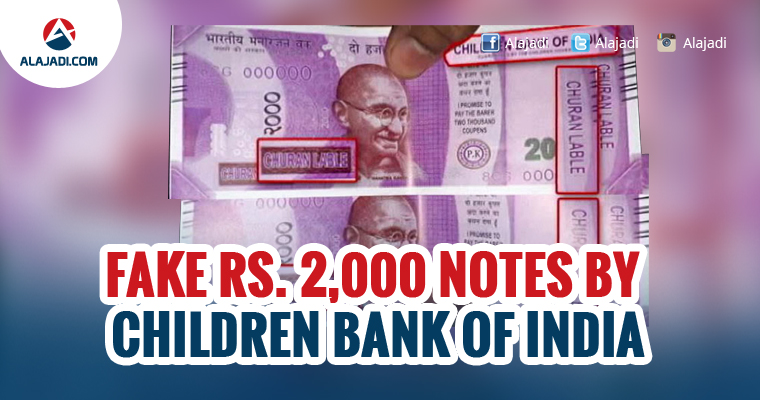 The notes, dispensed on February 6, read Children Bank of India in place of Reserve Bank of India and Guaranteed by the Children’s Government in place of Guaranteed by the Central Government. Churan lable in place of the latent image and a fake PK logo instead of the bank’s seal, are among some of the other obvious deviations on the note. Senior police officers say that when the policeman probing the case tried to withdraw cash from the ATM, he too got similar bills, following which an FIR was registered under sections of forgery and cheating. Police have also contacted the bank authorities and have initiated an inquiry into the incident.

SBI, in a statement, has said the chances of fake notes from its ATM are very remote. SBI has in place, at all its Currency Chests a very robust system for monitoring the quality of notes. All notes received by the Bank and to be dispensed by the Bank, either through its ATMs or its branches, are processed through the latest state-of-the-art Note Sorting Machines. Thus, no fake note is likely to be dispensed through Bank’s ATMs at any time, the statement said.

A case of cheating has been filed. The last man to fill cash in the machine has been identified from CCTV footage. Till now, there have been no other complaints. Probably, only a few notes were changed. We have to identify at which point the real notes were exchanged, said an officer. 2000-rupee notes debuted after the government banned Rs. 500 and 1,000 notes overnight in November. The new notes were said to be tamper-proof with several high security features.