Has Southern Diva Samantha converted to Hinduism. Samantha and Naga Chaitanya who are soon going for a wedlock, have performed a pooja sitting together at a religious place in presence of priests.Two photos are circulating on the net which caught the attention of netzines. Samantha has changed her religion Christianity to Hindu with this Pooja. While others say, the couple has performed ’Rahu Ketu’ Pooja or is it any other Akkineni family ritual? . Maybe it could be a pre-wedding Pooja also. Nagarjuna is also seen along with Naga Chaityana and Samantha . 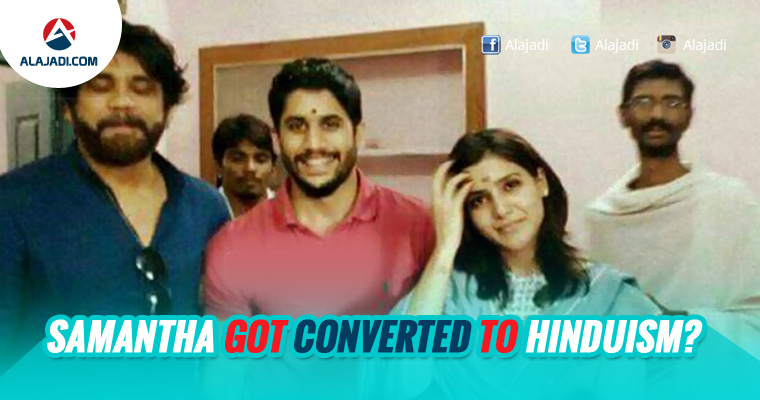 However, The exact purpose of this special pooja is not revealed yet, possibly they have finalized the date of their engagement. The photos show a beaming Chaitanya and Samantha squatting on the floor to perform a pooja. In another pic, she is seen along with Nagarjuna and is seen sporting tilakam. A couple of purohits are also seen in the background. The wedding ceremony may happen in the first half of 2017. On the other hand, there are also reports that Naga Chaitanya and Samantha may also star in the remake of Bollywood blockbuster ‘Two States’.