For the last 10 days, all is not well in Akkineni clan. Ever since the news of Akhil and Shriya’s engagement got cancelled and their destination wedding in Italy in May was called off, there have been several speculations and innumerable rumors. Since none of the family members have come out in open and talked about the matter or tried to clarify any of the rumors, it has fueled the speculations. While Nagarjuna is miffed and avoiding private events, public presences, even the family members too evading the limelight. 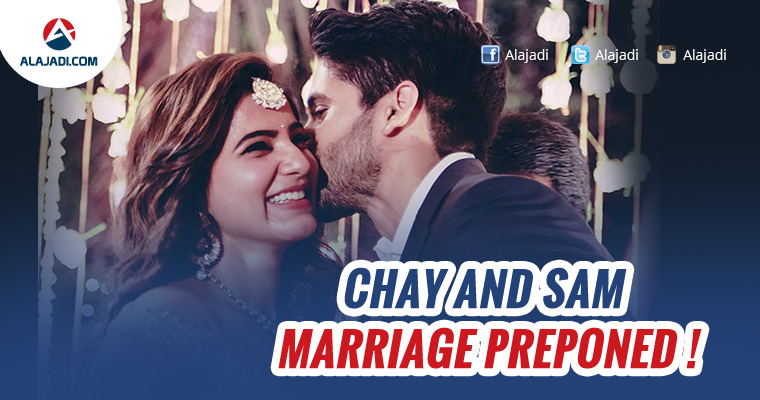 And here is the exclusive piece of news. It’s reliably learnt that Samantha and Naga Chaitanya are going to advance their wedding. The couple, who entered into engagement, are going to tie the knot sooner than their initial planning. Originally, the couple hadn’t decided on entering into wedlock this year. The initial plan was to had Akhil and Shriya’s wedding in May. And Chai-Sam wedding was supposed only for 2018 depending on both the actor’s professional commitments – especially Samantha’s. So, the decision of Samantha and Chaitanya’s marriage was left to Samantha as she wanted to do films before marrying and settling with Chaitanya. Although Sam would continue to act post wedding, but she is much aware of the act that she wouldn’t get the offers post marriage like before. So, she decided to take time and her beau Chaitu, father-in-law-to-be Nagarjuna too agreed for it.

In fact, Samantha had even told media that her wedding would not be sooner and would be later next year. But everything has been changed in Akkineni camp. In the last 10 days, in a drastic change of events, Akhil’s wedding was cancelled and this is seen as a major jolt to the family. As per the latest discussions within the family and also after consultations with a top astro pundits, it’s said that a ‘Subhakaryam’ (Good Event) shall overturn all the vibes.

This is said to be why Samantha and Naga Chaitanya have now decided to go for marriage before than earlier. And yes, it will be two weddings – one as per Hindu traditions and second as per Christian customs. Nag and family have decided to keep these weddings as private affair limiting to family, friends and industry people.