The Greater Hyderabad Municipal Corporation (GHMC) launched a pilot centre of a scheme which would provide subsidized hot and hygienic meals to the poor for Rs 5 at Nampally Sarai. The Greater Hyderabad Municipal Corporation (GHMC) has decided to increase its number of Rs 5-per-meal kiosks from the present 50 to 150 to help poor who are affected by the demonetization drive. The Rs 5 meal served in the afternoon at special kiosks opened by GHMC is mainly popular among laborers and other daily wage earners. 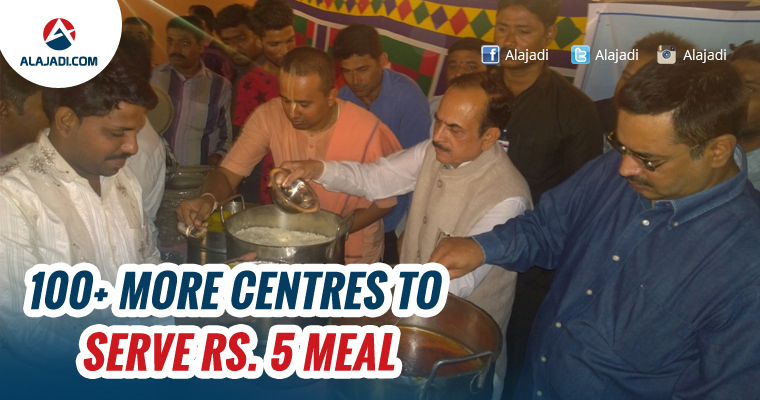 The actual cost of the meal would be Rs 20. GHMC will bear the balance cost. To start with, GHMC has partnered with Akshaya Patra Foundation, run by Hare Krishna Movement, which will prepare the food. Minister KTR announced that they are providing meals for Rs 5 for the poor people and building workers in Twin Cities. So far, over Rs 13,000 persons are making use of this facility in 52 centers. Mayor Bonthu Rammohan said that this decision was taken with the advice of Chief Minister. Within another week, the places where the new centers will come up will be announced, he said. In these centers, the poor are able to get a good meal of rice, curry, dhal and chutney, just for Rs. 5..

GHMC Mayor B Rammohan said about 15,000 people are being fed daily at the 50 kiosks and the number of such centres would be increased to 150. The move to increase the number of kiosks is expected to cost Rs 30 crore, he added.