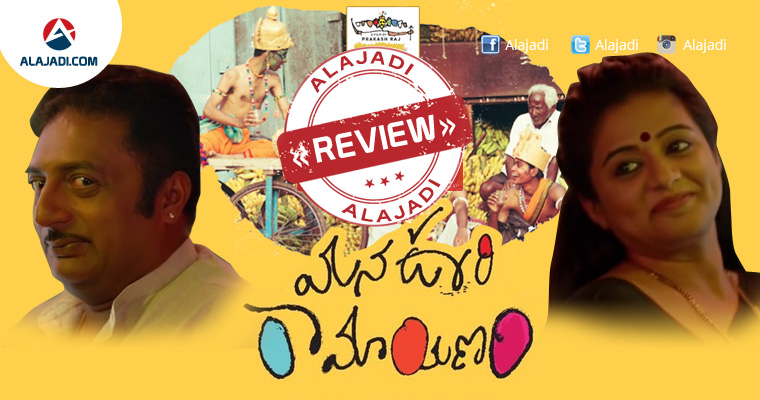 Bhujangaih (Prakash Raj) is one of the most respected persons in his village. He has a teenage daughter whom he plans to get married off quickly. One fine day, he gets into a heated argument with his family regarding this and walks out of his house in anger. He gets drunk fully and spots a prostitute (Priyamani) and hires her for the night. Bhujangaih brings her to a small shop which is located in his house compound and asks his auto driver Shiva (Satyadev) to lock him from outside and come back after an hour. The twist in the tale arises when Shiva gets arrested and Bhujangaiah is left in a tricky situation. Rest of the story is as to how Bhujangaih comes out of this mess without getting caught by his family.

Mana Oori Ramayanam makes for a perfect watch for the festive season. This is different genre films this time came with a simple topic highlighting the troubles of a person who values prestige but suffers due to one weak moment in life. He came with routine story with no real twists. The only saving grace is he attracted with his dialogues in the film.

Prakash Raj: He attracted with his performance. He showed perfect expressions according to the situation taking movie lovers along with him. His dialogues are natural and realistic.

Priyamani: She is good with her looks. She did not get much role to perform.

Both Prakash Raj and Priyamani chemistry worked out well. 30 years Prudhvi attracted with his performance. He got good dialogues to show his talent. Satya Dev performed quite well along with Raghu Babu. Others did according to the story.

Prakash Raj goes into minute details and nicely handles the every aspect of the film. Right from the setup to the characters shown, the small town thinking and nativity has been handled quite well. The camera work is superb and showcases the village life decently. The background score by Ilayaraja is top notch and lightens up the proceedings. Screenplay by Prakash Raj is another good part as the proceedings move on a crisp note and end the film well.