Lucknow is famous for its traffic jams and we all got a proof of the same when Paytm’s CEO Vijay Shekhar Sharma visited Uttar Pradesh Chief Minister Akhilesh Yadav in a rickshaw. The Internet got to know about the same when Yadav tweeted a picture of Sharma and himself with the rikshaw in the same frame. 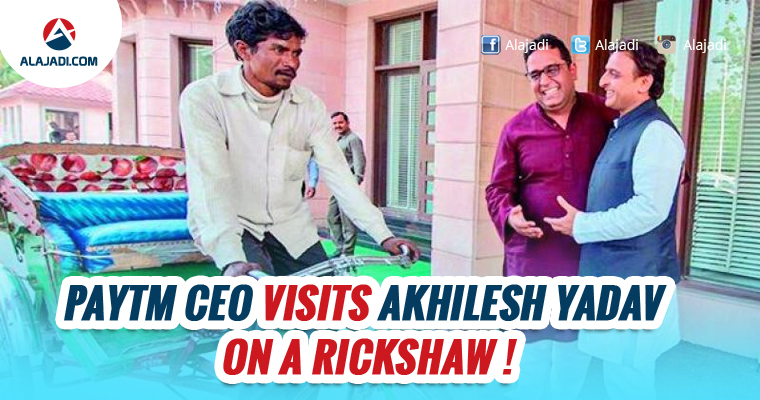 Vijay Shekhar went to Lucknow to receive ‘Yash Bharti’ Award but in the morning he preferred to take a cycle rickshaw ride because he was getting late and his car was stuck in traffic. Security officers at Akhilesh’s 5 Kalidas Marg residence allowed Paytm chief and the rickshaw-puller Maniram to enter only after proper verification, sources in the police department said.

Akhilesh liked the gesture and after inquiring about the rickshaw-puller Maniram handed him Rs 6,000 as diwali gift. He also assured him a house, e-rickshaw and Samajwadi Pension scheme for his wife.

The chief minister also shared his picture on twitter. “A traffic jam forced Paytm CEO Vijay Shekhar Sharma to visit us in a cycle rickshaw. Lucknow Metro will help solve the traffic jams in city,” his tweet reads.

A traffic jam forced Paytm CEO Vijay Shekhar Sharma to visit us in a cycle rickshaw. Lucknow Metro will help solve the traffic jams in city.