HMD Global has taken all the rights to manufacture Nokia mobiles with which it launched the Nokia 3,5,6 mobiles. The company has made another move to launch a flagship smartphone which has a similar look of its predecessors but a dual camera. The company has also introduced a camera feature which includes the ‘bothie’ mode, which will allow users to use both front and back camera on a single screen.

Finding a reliable, well-built Android phone with few software modifications and a reasonable price tag is harder than it once was. OnePlus was once the favorite for this region but it didn’t manage to put the price tag below $500 and made it to the expensive one. Nokia has added what it calls “Ozo Audio” to the Nokia 8. The Ozo, for those not in the know, is Nokia’s (that’s OG Nokia, not HMD) take on a 360-degree camera for creating VR content but HMD is bringing its audio feature with this mobile.

The Nokia 8 undergoes a rigorous 40-stage process of machining, anodizing and polishing to ensure its distinctive design pairs flawlessly with the polished aluminium unibody. The smartphone is first for mobile phones, the exclusive Dual-Sight mode lets you use both front and back cameras simultaneously for split-screen photos and video. With Facebook Live feature, Share the moment in the moment with built-in streaming straight to Facebook Live™ and YouTube Live. Your creations are one touch away from the world. 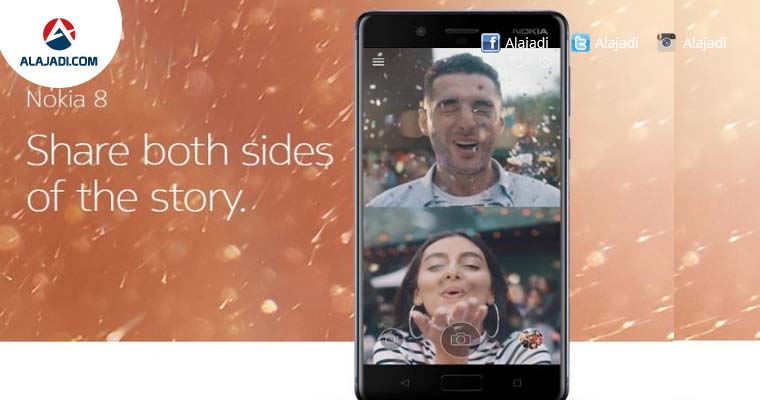 Nokia 8 is the first ever phone to feature Nokia OZO spatial 360° audio built in to its core. Capture moments with tech used by Hollywood filmmakers and music producers, then relive them as if you never left. The smartphone features a Polarized 5.3′ inch 2K display which offers ultra colours with Vivid and super clarity. Nokia 8 is built upon the cutting-edge Qualcomm® Snapdragon™ 835 Mobile Platform, engineered to deliver exceptionally long battery life. The smartphone comes with 4 GB of RAM and Loads of space with 64 GB mass storage¹ and MicroSD card support up to 256 GB. The phone will be sold in blue, steel/silver, gold/blue, and gold/copper variants.

Nokia 8 features a 13 MP dual image-fusion rear camera with both colour and monochrome sensors, plus a wide-angle 13 MP phase detection auto-focus front camera. Both front and rear cameras are equipped with ZEISS optics, meaning every snapshot moment becomes a story worth sharing. Nokia 8 comes with Android Nougat 7.1.1, packed with the full spread of Google’s most popular apps and no unnecessary extras. From managing tasks and planning your day to controlling your favourite apps and smart home devices, Google Assistant is ready to help wherever you are. Nokia 8 will be priced at EUR 589 (roughly Rs. 43,400). It is also lower than the earlier tipped price of EUR 749 (roughly Rs. 55,300), while the India price was tipped to be at Rs. 44,999.