The  Indian Space Research Organisation (ISRO) on Monday will be launching India’s heavy-lift rocket GSLV Mark III carrying the 3136 kg communication satellite, GSAT-19 into a Geo-synchronous Transfer Orbit (GTO) in space from Sriharikota in Andhra Pradesh. The 25-and-a-half hour countdown for the launch began at 3.58 pm on Sunday. Called the ‘Fat Boy Satellite’, the GSLV Mark III-D1 rocket will be launched at 5.28 pm from the second launch pad of the Satish Dhawan Space Centre at Sriharikota, that is around 120 kms from Chennai. The vehicle is scheduled to launch the GSAT-19 into the GTO at 16.20 minutes after lift off. 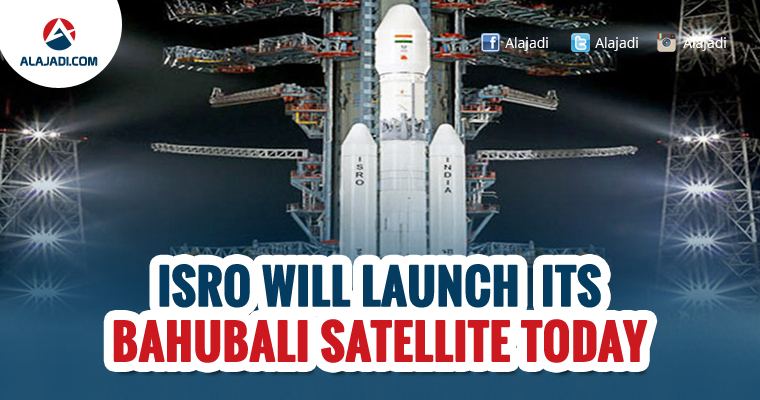 We are pushing ourselves to the limits to ensure that this new fully self-reliant Indian rocket succeeds in its maiden launch, ISRO chairman AS Kiran Kumar said. At 43 metres, the rocket is higher than a 13-storeyed building. While it’s capable of launching four ton communication satellites, it can also send six to 10 ton bodies into low earth orbits. If all goes well in the next few years and after a slew of at least half a dozen successful launches, the GSLV-Mk III which was earlier named Launch Vehicle Mark-3, could become India’s vehicle of choice to launch Indians into space. Dr K Kasturirangan, former chairman, ISRO said, The success of GSLV Mk- III will usher in a new era of our self-reliance in the context of launching our own four ton class of satellites for geosynchronous missions.

The rocket is powered by an indigenously designed cryogenic engine that uses liquid oxygen and hydrogen as a propellant. While the estimated cost of the new rocket is around Rs. 300 crore, it will help the country save almost as much when it will be used to place the country’s communication satellites. India already has two operational rockets — the workhorse PSLV that can hoist satellites of 1.5 ton into space and was the preferred vehicle for India’s maiden mission to Moon and Mars and the Geosynchronous Satellite Launch Vehicle Mark II which can hoist 2 ton class of satellites. However, because of its repeated failures, it was dubbed ‘the naughty boy of ISRO’.

India is to launch its most powerful homegrown rocket today – will be another milestone for its space programme https://t.co/0KgDtJ0xD5 pic.twitter.com/1UC7T2JrQZ