Young hero Ram is on the rise again after the blockbuster “Nenu Sailaja,” and he has been very finicky in picking the scripts that suit his age and image. After over a gap of 9 months, he came up with yet another entertainer. Ram’s “Hyper,” directed by Santosh Srinivas of “Kandireega” fame has hit the screens today. 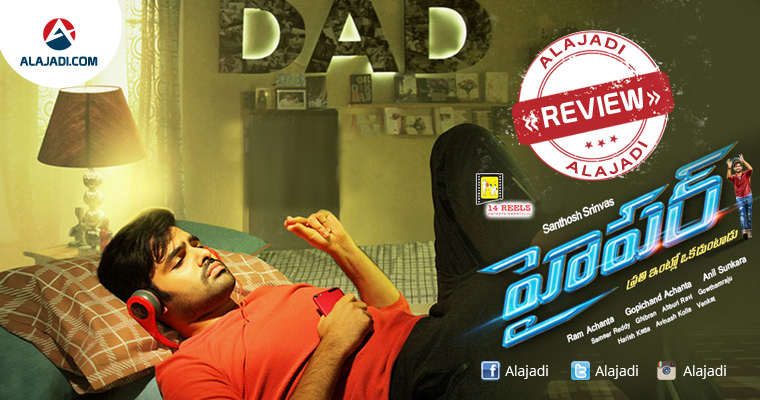 Surya(Ram) is a carefree youth who is obsessed about his dad Narayana Murthy(Satyaraj). This love for his dad lands Surya in trouble all the time. Things take an ugly twist when a powerful minister(Rao Ramesh) locks horns with his dad who is a sincere government officer. Things get to a point where the minister is hellbent on getting a file signed by Surya’s dad. As Narayana Murthy stands firm on his values and does not sign the file, the minister starts targeting his family. Rest of the story is as to how Surya takes things in his hands and saves his dad from this chaos.

Parallel to the story, there lies a romantic track between Ram and Raashi Khanna. Bhanu (Raashi Khanna) is head over heels for Surya, but he falls in love with an anonymous girl selected by his father, even without seeing her. Despite that, Bhanu continues to love him. Who is the girl, Ram’s father chooses for him and whether Bhanu wins her love, forms another part of the story.

Though the story is a tried and tested concept, it’s director Santosh Srinivas’s treatment and gripping screenplay with immaculate dialogues, that makes “Hyper,” a perfect entertainer to watch. Film also has senior artists and family emotions have been highlighted in between Hero and Father characters. The earlier released trailer have got a positive response from viewers and whoever have waited to watch Ram in the new film can feel good with its positive review.

Ram: The role is a tailor made for Ram and he carried the role with great charm.

Raashi Khanna: Raashi Khanna is bubbly as ever and has done complete justice to her role, she is definitely one of the major assets of the movie.

Satyaraj: He is the man of the moment without the doubt. The ‘Kattappa’ of “Baahubali,” has been apt for father and elderly roles in recent years and he excels once again.

Rest of the cast have done enough justice to their roles.

Production values by 14 Reels are very good as the film has some very fresh and rich visuals. Music by Ghibran is just about okay. The screenplay is a huge asset as most of the film runs through an interesting thread. Coming to the director Santosh Srinivas, he has done a decent job with the film.Background score by Mani Sharma is below average.