Hyd – 5th Most Dynamic City in the World

Giving a big boost to the efforts of the Telangana’s Municipal Administration Minister K Taraka Rama Rao to make Hyderabad as an International city, the city succeeded getting a global tag. Justifying his efforts for the last two years, a City Momentum Index (CMI) to identify the world’s most dynamic cities, prepared by global financial services firm JLL, and has evaluated Hyderabad as the fifth most dynamic city in the world.

Aspects such as GDP, Population, Technology, Corporate Headquarters, Innovation, FDIs, Real Estate and Air Traffic were considered for the Survey. Hyderabad managed to clinch 5th position because of Technology and Innovation. It is jubilant for KTR as the United Nations World Cities Report 2016, also being discussed by the WEF, says India, with five mega cities now, will have seven mega cities by 2030. The two predicted to become mega cities by 2030 are Hyderabad, followed by Ahmadabad.

So far, only three cities London, Shanghai and Silicon Valley have consistently made it to the top 10 since the index was first published in 2014. Environment and housing are among several  additional factors considered for the ranking. The first set of factors, which accounts for 40 pc of the overall ranking includes socio-economic factors, air passengers, corporate headquarters and foreign direct investment. The second, accounting for 30 pc, focuses on commercial real estate momentum, which encompasses changes related to construction, rents, investment and transparency in the office, retail and hotel sectors. 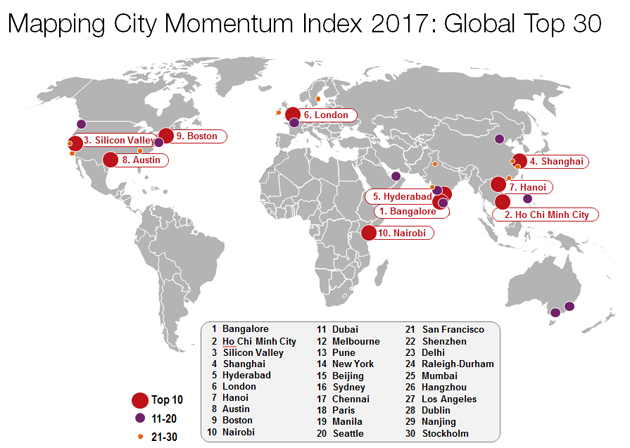