The most awaited trailer of young actors Arjun Kapoor and Shraddha Kapoor starrer Half Girlfriend released today. It is a romantic comedy film based on the novel of the same name written by Chetan Bhagat. The novel, set in rural Bihar, New Delhi, Patna, and New York, is the story of a Bihari boy in quest of winning over the girl he loves. 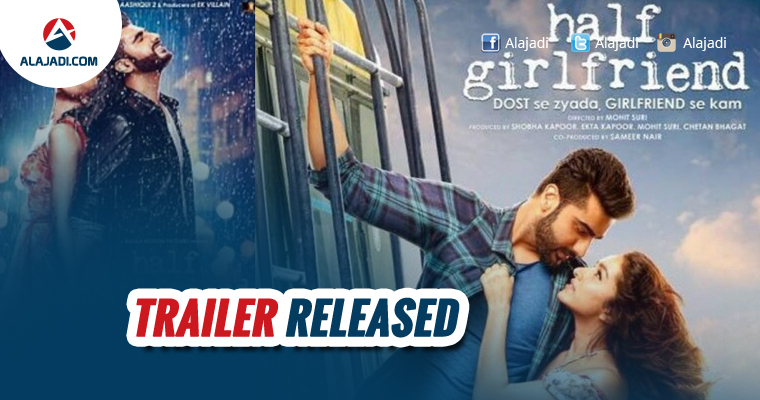 The trailer showcases the lead cast Arjun Kapoor and Shraddha Kapoor will be seen in the roles of Madhav Jha and Riya Somani respectively. The trailer will give glimpse Madhav Jha( Arjun Kapoor) unconditional love with Riya Somani(Shraddha) and problems in their relationship. Arjun Kapoor took official twitter handle to share the trailer and wrote, “Presenting the first peek into Madhav and Riya’s story #HalfGirlfriendTrailer #LetsMeetHalfway”. Watch Half Girlfriend Movie Trailer Here.

The film is directed by Mohit Suri and produced under the banner Balaji Motion Pictures and ALT Entertainment. The film also stars Rhea Chakraborty, Seema Biswas and Vikrant Massey. The film songs are composed by Mithoon, Tanishk Bagchi, Rishi Rich, Farhan Saeed, Ami Mishra and Rahul Mishra, while BGM by Raju Singh. And, why from a basketball player she becomes a singer? Why Arjun is searching for her in the streets of London when he is based in Bihar? The film is scheduled for a worldwide release on 19 May 2017.