India crushed Pakistan by 124 runs to win their first ICC Champions Trophy 2017 match at Edgbaston in Birmingham on Sunday. In a rain-interrupted match which saw the target revised to 289 in 41 overs, Pakistan’s batting order crumbled thanks to India’s brilliant bowling attack. Defending Champion India began the ICC Champions Trophy 2017 campaign with an emphatic 124-run win over arch-rival Pakistan in their first game of the tournament. On a day that completely belonged to India, both bowlers and batsmen shone to crush the rival team. 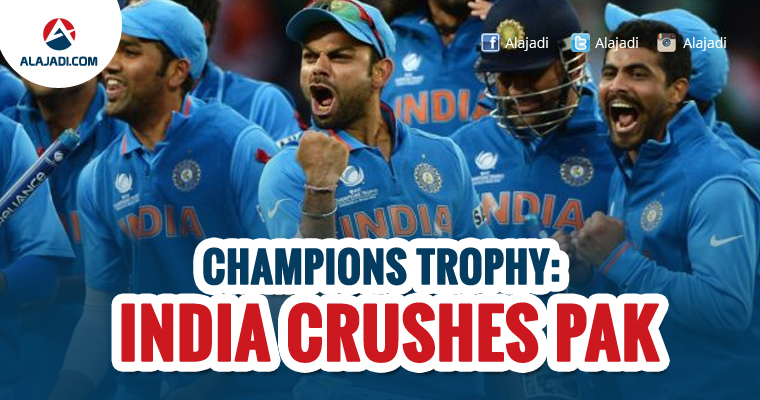 After winning the toss, Pakistan invited India to bat. Although the openers Rohit Sharma and Shikhar Dhawan had a slow start, they put on an assured 136-run stand before the latter was dismissed for 68. Skipper Kohli then joined Rohit and the dashing duo steadied the game in India’s favor. The Indian innings was interrupted twice by rain before Rohit got run out for 91.  India scored 72 off the last four overs.

Then came the experienced Yuvraj Singh, who smashed 53 runs off just 32 balls to help India post a formidable total. Kohli’s aggression at the end and Hardik Pandya’s entertaining cameo, including his three sixes of the last over, took India to 319/3 in 48 overs. Chasing a revised target of 289 in 41 overs, Pakistan batsmen had been troubled throughout the innings by the Indian bowlers. In the end, Pakistan conceded a 124-run defeat after getting all out for 164 runs in 33.4 overs. Yuvraj Singh was adjudged Man of the Match for his brilliant knock.

India will next play against Sri Lanka on June 8.