Bharat Bandh on Nov 28 against demonetisation

A united Opposition today called for a nationwide Bharat Bandh on November 28 to escalate their protest over the demonetization drive. Terming it as Aakrosh Diwas, a united opposition has decided to launch a nation wide protest. More than a 12 Opposition parties have decided to intensify their campaign against the note ban in the states where they are either in power or have a significant presence.

A united opposition on Wednesday held a protest against Prime Minister Narendra Modi’s continued silence and absence inside the house despite growing demands for him to speak on the demonetization issue. Thirteen opposition parties, baring the Left and the Aam Aadmi Party, protested at Parliament’s Gandhi Statue demanding answers on demonetization. 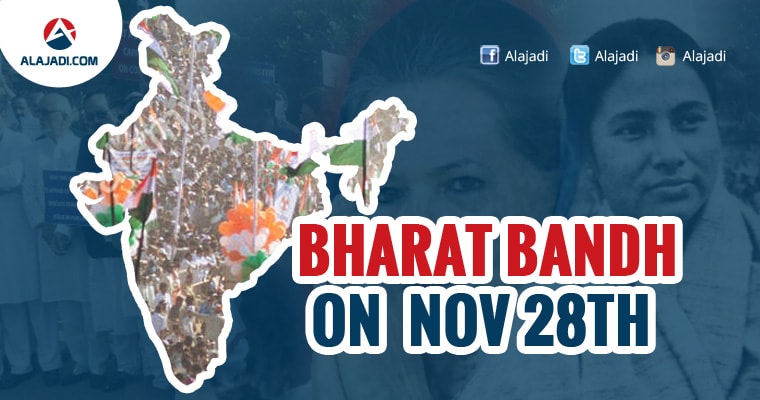 Most opposition members demanded that the debate should take place under adjournment motion, even as Biju Janata Dal and Telangana Rashtra Samiti (TRS) said they have not given adjournment notices. Congress leader Mallikarjun Kharge said the opposition is ready for a debate, and accused the government of not wanting to debate on the demonetization issue. Union Minister M. Venkaiah Naidu said the nation is backing the demonetization decision. Let the discussion take place.. people want the house to function and debate this issue. The whole nation is backing the Prime Minister on this decision, he said.

Meanwhile, Bengal Chief Minister and Trinamool Congress Chief Mamata Banerjee held a protest at Jantar Mantar on Wednesday that was also joined by veteran actress and Samajwadi Party member Jaya Bachchan. She added, I challenge BJP that this time nobody will support their party, even their own workers will abandon them.

“Demonetization is a radical monetary step in which a currency unit is declared as an invalid legal tender. Demonetization is usually carried out by the governments across the world to curb the menace of counterfeiting, black money and money laundering.”