Nandamuri Balakrishna is the quintessential actor in Tollywood, having an unwavering commitment towards his professional career. The hype around his movies ensures the fan frenzy and makes him reach transcendent levels. The actor is known for his powerful dialogues and action oriented scenes. 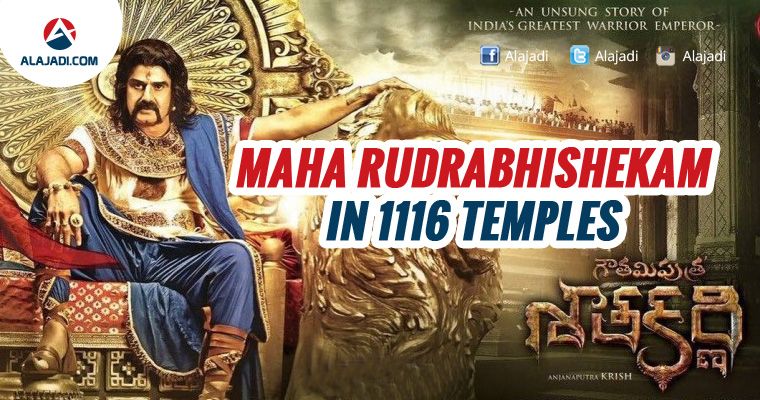 The veteran actor is on the verge by creating a history with his much-anticipated 100th film Gauthamiputra Sathakarni, directed by a National Awardee director Krish of Kanche fame. Sources revealed that the shooting of the film was wrapped up a few days ago. Currently, the unit is busy with its post-production work.

Nandamuri Fans are planning to perform Maha Rudrabhishekam in 1116 Shiva Temples all over the country  on 28th November at a time on the auspicious day of Karthika Somavaram. Balakrisha will also perform the pooja  in any one of 1116 Shiva Temples on the same day along his fans. Balayya fans are confident on the success of the movie and celebrating every moment in a grand way. Recently they visited 100 religious places around the country with the posters of Gautamiputra Satakarani and offered special prayers.

Balakrishna will be seen as a warrior emperor in this film which is produced by First Frame Entertainments production company. Shriya Saran and Bollywood veteran actress Hema Malini will be seen in pivotal roles along with Balakrishna for the same. The theatrical trailer will be out on 9th of December and audio launch event of Gautamiputra Satakarni is scheduled on 16th December. Gautamiputra Satakarni is expected to hit the screens on 11th January by next year. Hope, the film will flourish to be the best.