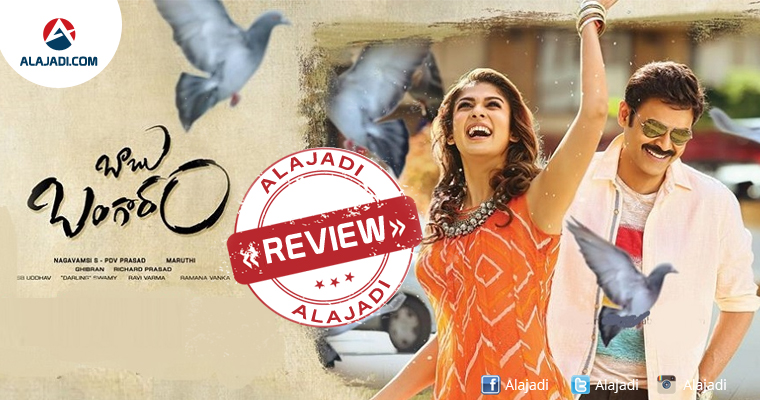 Victory Venkatesh is going to show up on the silver screen after nearly two years. Venkatesh fans can finally rejoice as their favorite actor is finally coming back to the big screen with Babu Bangaram. He has teamed up with successful director Maruthi for a different commercial entertainer. Babu Bangaram is the Telugu Movie which is going to hit worldwide silver screens on this Friday 12th August.

Venkatesh will be seen as ACP Krishna who can be intimidating with his towering presence but is actually a merciful officer.  Actress Nayanthara as Selvi  played nice in the role of the main heroine, she i s a middle class girl who has family issues, that is to be financially independent and to take care of her large family. Selvi father is absconding from Police, as a false murder case has been put on him. Krishna falls in love with Selvi and solves all the problems while punishing the bad guys. The story of the movie is simple, but the film well managed with fun and action scenes.

Star hero Victory Venkatesh, who took a brief gap post Gopala Gopala, is back with a fun-filled entertainer titled Babu Bangaram that has him playing a funny cop. Venky’s trademark situational comedy and the action episodes are going to be the major highlights for Babu Bangaram. This is the third time that Nayan has paired opposite Venkatesh. They previously worked in Thlasi and Lakshmi movies.

Victory Venkatesh: Venkatesh is at his usual best. He is back after 2 years and he is still seen with same energy levels.

Nayantara: She is so gorgeous and Tollywood has definitely missed her a lot. She really did well in all the frames.

Sampath Raj grabs our attention after the lead casting. Posani Krishna in particular has been good. His characterization is also too good. Murali Sharma and Vennela Kishore have done their routine jobs as supporting roles and they have fit the bill perfectly. The casting is strong and there are no doubts about it.