The much -awaited trailer of Akshay Kumar’s Jolly LLB 2 was revealed Monday morning. Directed by Shubhash Kapoor, the film is a sequel to his 2013 sleeper hit Jolly LLB, which starred Arshad Warsi in the lead role as a lawyer. This time Akshay replaces Arshad and plays a small time lawyer who has never done anything great in his life and stumbles upon a life-changing case that is likely to make or break his career. From the two-and-a-half-minute long video, we come to know that the case also poses several moralistic challenges to Akshay’s character. 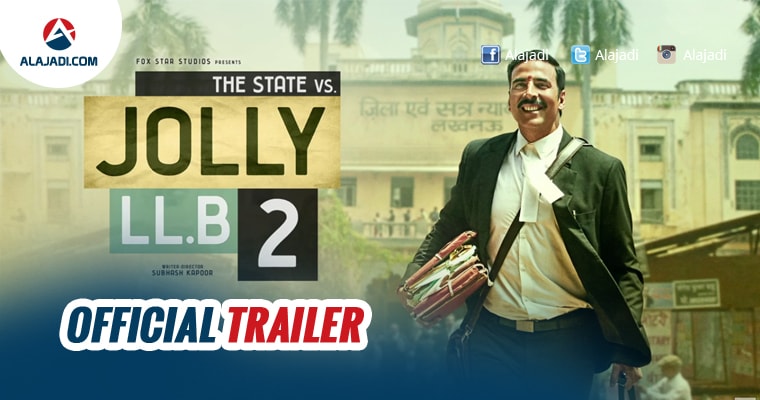 He tries his best to win a case rather than losing the money which he had taken from his clients. His means of winning a case even includes adjuring the Judge too so that he need not pay back the money to his client. Pushpa Pandey aka Huma Qureshi plays his wife. Jolly promises her that there comes a day when they both travel in Rolls Royce.

His face off will be with his rival lawyer played by Annu Kapoor and the two argue hard in the court. And, as in the first part, Saurabh Shukla plays the irritated judge in the second part too. Annu Kapoor gives a tough fight to Akshay in this movie. The case which they fight is now even more powerful and also intensified than that of the case fought in the first part. What is pending is to see how Jolly fights for it.

Arshad Warsi played the role of Jagdish Tyagi in the first part of this movie i.e Jolly LLB. The absence of Arshad is filled by Akshay Kumar and his quick-witted acting skills.He perfectly nailed the character of Jolly. This movie will be another milestone in Akshay Kumar’s career. Saurabh Shukla too grabbed the much-needed attention towards him. He won the National Film Award for Best Supporting Actor in the first part of the movie. Hope, even in this part he renders the same to the audiences.