Reliance Jio once again surprised its users by introducing new Jio Dhan Dhana Dhan plan on Tuesday. The company also announced that it is fully withdrawing its Summer Surprise offer following the advice of Telecom Regulatory authority of India (TRAI). Jio Dhan Dhana Dhan is company’s new ‘all unlimited’ plan with special benefits, exclusively for its Jio Prime members as well as for its new users. The plans start with the Rs 309 plan, which provides unlimited SMS, calling and data with 1 GB 4 G data per day for 84 days on first recharge. 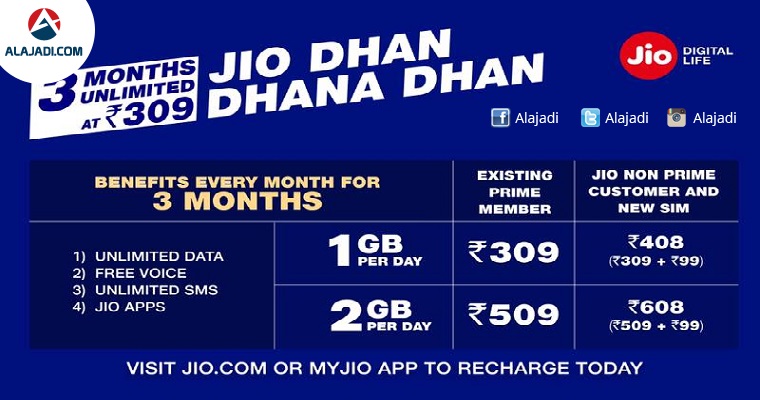 In the meantime, if you are curious about the new Jio plan, here are all the relevant details you need to know.

2. There are two types of plans under Jio Dhan Dhana Dhan: Jio has introduced two types of plans under its new offer – one for Prime members and the other for non-prime members. Users who have already taken the Prime subscription for Rs 99 will get unlimited voice calls, SMS and 1 GB 4 G data per day for 84 days at Rs 309. This means in total they will get 84 GB 4 G data on first recharge for three months. For subsequent recharge, the data is reduced to 28 GB and the pack validity is only for 28 days.

5. Idea behind the Jio Dhan Dhana Dhan: Jio says it is currently implementing the world’s largest migration from free to paid services in such a short period of time and therefore for the smooth transition it has implemented these plans. The bottom-line of the story is that Jio is no longer going to be a free affair after April 15, 2017 and users will have to take one or the other plan to continue using its services. Company has clearly stated that those who have not done their first recharge so far, need to do so by 15 April 2017 to avoid discontinuation of services.