The Popular Telugu Reality Show Bigg Boss Telugu Season 1 Which is Hosted by Young Tiger NTR getting nice response from audience and viewers going crazy day by day show receiving nice TRP. On Thursday ninth episode of Bigg Boss Telugu aired and revealed the Burning Star Sampoornesh Babu’s violent behaviour and he Eliminated Himself From Bigg Boss. Being locked up at one place for days can do strange things to people and Sampoo looked quite badly affected. Some of his fans even raised concerns over his mental condition after watching ninth episode. The Hrudaya Kaleyam actor was seen emotionally drained from last week and was feeling claustrophobic. 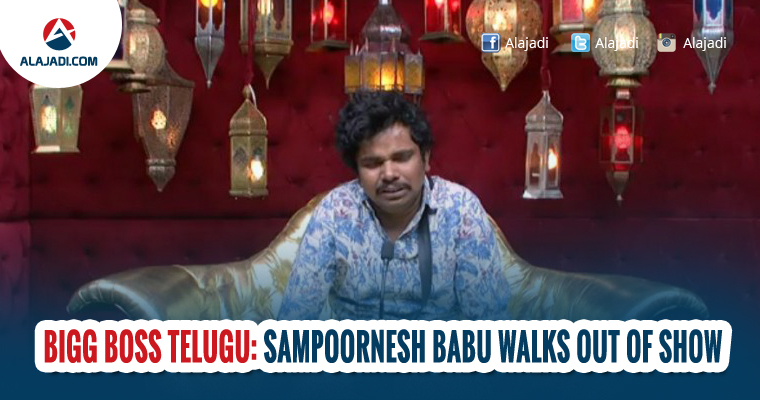 As Per Insider Reports Sampoornesh Babu Even Tried to commit suicide using a knife inside the house. This violent act was reportedly not shown on the prime-time as it was not suitable for screening.As per the contract of Bigg Boss Telugu, the contestants cannot leave the house on their wish and they must follow the rules and regulations of the house. If they leave the house in the midway, they have to pay huge financial penalties as per the contract.

Moreover Some viewers opined that Sampoornesh babu wasted a great opportunity as he was the most entertaining celeb in the house, and would have won the title if he had stayed. Actress Jyothi was the first contestant to have been eliminated by Bigg Boss last Sunday.The nomination for the elimination from Bigg Boss Telugu house for the second weekend was completed on Monday leaving participants like Sameer, Prince, Madhu Priya and Sampoornesh Babu in the danger zone. Sampoo in already out of the show and Let’s see who is going out this weekend.