Just after news about Indian Team leaving to West Indies without Anil Kumble in London came in, here’s one more flash news about Anil Kumble. After a lot of disagreement between players, Kumble finally stepped down as head coach for Indian Cricket Team. Virat Kohli, the skipper made it clear that his relationship with the coach has reached a dead end. This happened when Virat and Cricket Advisory Committee, comprising Sachin Tendulkar, Sourav Ganguly and VVS Laxman had a meeting after ICC Champions Trophy final match against Pakistan. 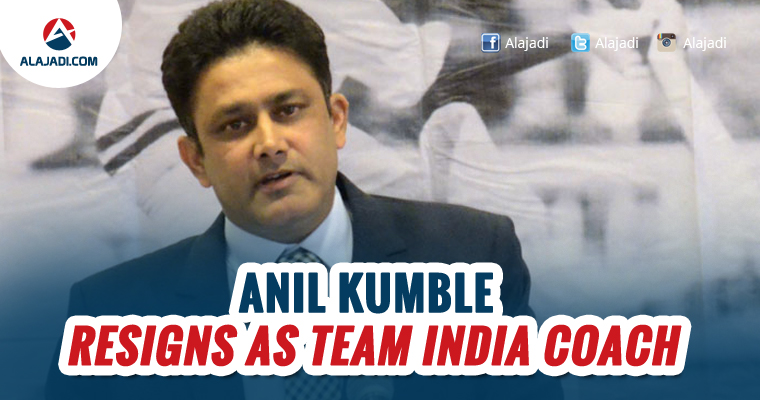 The Board of Control for Cricket in India (BCCI) confirms that Anil Kumble has withdrawn his services as the post of the Head Coach for the Senior India Men’s team, said the BCCI in a statement. While the Cricket Advisory Committee had endorsed an extension to his tenure as Head Coach, Anil Kumble has decided not to continue as the coach. Kumble was one the leaders of the pack when the Indian cricketers sought a coach from overseas to help the team on their journey back to sanity from the grim saga of match-fixing. Along with skipper Sourav Ganguly and his deputy Rahul Dravid, it was seniors like Sachin Tendulkar, Javagal Srinath and Kumble who impressed mandarins on the board to endorse a change.

Actually, Kumble’s 1 Year Contract as Team India coach ended with recently concluded ICC Champions Trophy 2017. In the past one year, India won 10 out of 13 Homes Tests. While two matches ended as draw, Men-in-Blue lost in the other game. Even Test Series in West Indies and ODI Series against New Zealand were won by India during this period. So, Kumble could always be proud of what he achieved as the Coach. Former India opener Aakash Chopra said the situation could have been handled better.

India will play five one-day internationals in the Caribbean starting June 23, with a Twenty20 international wrapping up the trip on July 9. The Cricket Advisory Committee, comprising – Sachin Tendulkar, Sourav Ganguly and VVS Laxman must be working hard to find a new coach for Indian Team.