Nani Is Super Excited About His New Mega Gift

Nani was recently seen as a guest in Megastar Chiranjeevi’s show Meelo Evaru Koteeswarudu. In that show Nani shared his childhood memories and said that he lost his new Hero cycle when he went to Satyam theater in Ameerpet to watch Chiranjeevis’s film ‘Master’ on the first show of first day. He was excited to get ticket for Master movie and did not feel bad about losing his favorite cycle at the beginning if the movie. 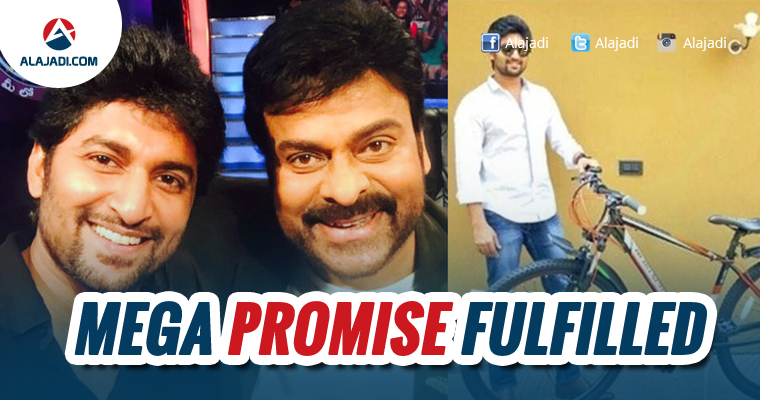 Nani is popularly knows as, Natural Star and that is only because he is so natural both in his real and reel life. Getting back to the story, Nani is a die-hard fan of Mega Star Chiranjeevi. When Nani was around 13 years of age, he went to watch Chiranjeevi’s Master movie. In a rush to buy tickets, Nani forgot to lock his cycle. By the time our little Nani came back, the cycle was stolen. This was a very precious cycle for Nani since he got it after asking his parents for over a year. That is when Nani decided that he will ask Chiranjeevi for a cycle some day!

Nani was on Meelo Evaru Koteeswarudu show hosted by Chiranjeevi. During their conversation, Nani told Chiru about this story. Nani expressed his excitement of his dream coming true to Chiranjeevi. On a funny note, Nani asked Chiru for his cycle. Chiru also promised him saying that he would surely gift him one. Today, keeping his promise, Mega Star Chiranjeevi gifted Nani with a Hercules cycle. After receiving this mega gift, Nani is on cloud 999999……! (The level of excitement). Nani was very happy to receive cycle from Chiranjeevi ad took a photo by standing by its side ad posted this photo in his twitter just to share his happiness.

And the boy got his cycle back 🙂
As promised on the show, Chiranjeevi Garu sent me this super cool cycle!#MegastarForAReasonpic.twitter.com/zMrbDLMwGj