Mahesh Will Teach Us Physics In B.com In SPYder

“B.Com lo Physics”, this phrase went viral on social media after politician Jaleel Khan used it in one of his interviews. The Telugu audience really got connected to this phrase and have been using the same on various occasions. Top comedians used this same phrase on the popular Jabardasth stage and from there on it has become a very commonly used term. This B.Com Physics has also become an interesting topic to make spoofs in the feature films. The latest is that Super Star Mahesh Babu is also going to use the same for a song in the movie. 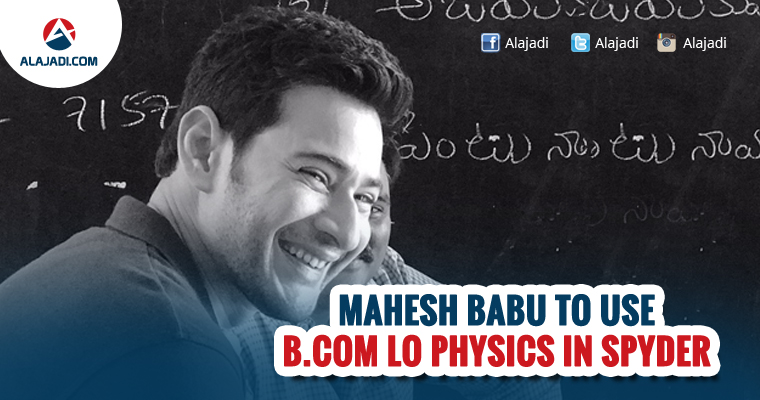 This phrase has become so popular that Mahesh Babu will be using the same in his next film titled Spyder under A.R.Murugadoss. If you guys are wondering that it will just be a dialogue than you guys are wrong. This phrase will be used in one of the songs. Not as a comedy scene or a satire, but as a lyric in a song, actually “B.Com lo Physics” is being used in Spyder, reveals a source. The lyrics go like, “there maybe physics in B.com but there is no chance of flaws in your curves” (B.com lo physics undachu emo ne sokukula kolathalo theda undavu). Apparently, this lyric is written by Ramajogayya Sastry and the makers are said to be in a dilemma whether to keep it or not. Did you guys like it? Do let us know because Mahesh Babu is still thinking whether to have this lyric in the song or no. This is interesting now and let us hope that it impresses us.

In case if the lyric is placed and finalised as is, then we could say that even Mahesh Babu has used ‘B.Com lo Physics’ jokes, just for the sake of creating some fun. Let’s see.