Warangal Police Commissionerate created a record by organizing a massive self defence technique awareness camp for girl children here on Wednesday. A total of 21,276 girls from various educational institutions took part in the one-hour programme, which was recorded by the Guinness Book of World Records at Jawaharlal Nehru Stadium at Hanamkonda.

Young girls from the city including students from Sudan, Uganda and Kenya, took part in the self defence training session. Girls from schools, junior colleges, degree, PG colleges and nursing students from private nursing homes and hospitals started poured in to the stadium early in the morning. A large number of students expressed their desire to join martial art academies to learn self defence. 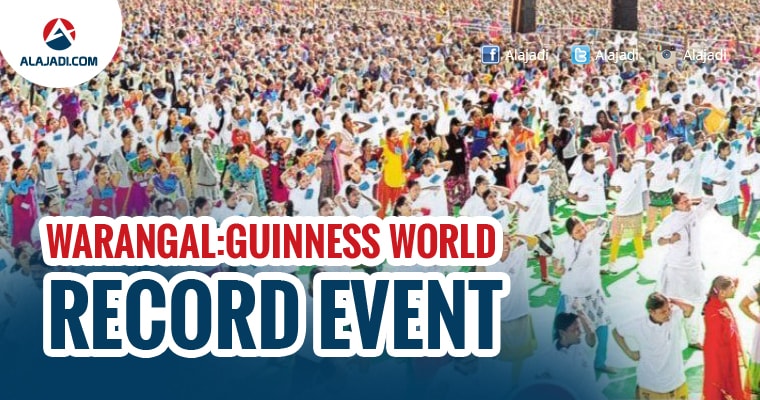 The previous record was held by South American Krav Maga Federation which organised Krav Maga, an Israel self-defence technique, lesson at Copacabana beach in Rio de Janeiro (Brazil) on May 29, 2010 in which 2,212 people participated. It may be noted here that a whopping 27,000-odd women and girls enrolled their names online to participate in self-defence lesson when the Police Commissioner came up with the idea of organizing Swashakti programme a couple of weeks ago.

The instructor who took the podium to explain and demonstrate the self–defence techniques was Rani Rudrama Devi Self Defence Academy founder Laxmi. Forming pairs, the girls repeated the techniques as the trainers demonstrated. Huge digital screens have also been erected for the benefit of participants to follow the instructions. The event was supervised by Sqn Leader R Jayasimha and Tripuraneni Gopichand, both representing the Guinness Records.

A majority of the young girls, who attended the session, felt that learning martial arts would help them. DGP Anurag Sharma while appreciating Warangal police commissioner G Sudheer Babu’s effort to popularize self defence among young girls and women. “We want to make them more self-reliant. The training would give lot of confidence to them. Martial art training is a must for girls. It would work as a deterrent to molesters, said by DGP.