There is a huge build-up regarding the character of Stylish star Allu Arjun in the film Duvvada Jagannadham aka DJ. Various rumors have been heard but now we get clarity on it courtesy a leaked image from the sets. In the image above we can see Stylish Star Allu Arjun in his new avatar of a Brahmin youth. In the past on Chiranjeevi and Jr NTR have played that role in Telugu cinema. That is why there was a huge build up regarding the character among the industry people. Now, we have an official confirmation with this leaked image. 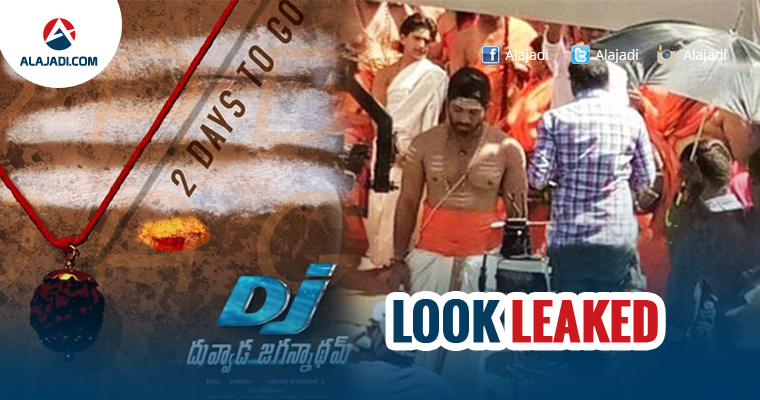 This is the still from Allu Arjun‘s upcoming film DJ Duvvada Jagannadham.”This image of Bunny is taking the social media on a storm. The unit has been releasing the pre-look posters for the past two days and has announced earlier the teaser is going to be released tomorrow at 8:45 A.M. By now we can understand that Harris Shankar, the director of this film is going to show Bunny in a completly never before new avatar. The pre-look posters have raised the curiosity levels of the fans to another level. Audiences were very curious to know about Bunny’s look in this film. Some thought that Bunny will be playing a hilarious brahmin character in the film, while others also felt that after the blockbuster of Sarrainodu, Harish Shankar will showcase Bunny in an aggressive role.

But to everyone’s surprise, this image will clarify all their doubts. Bunny has always tried something new and different and he was always successful in all his attempts. Let’s wait and watch how will our stylish star perform in this look. Pooja Hegde is the female lead in this film which is produced by Dil Raju as his 25th project and DSP scores music. We will have to wait for a few more hours for the teaser to be out, but meanwhile, the curiosity level is just piling up for Allu Fans.