Mega producer Allu Arvind seems to have got inspiration from Rs 1000 Crore Baahubali : The Conclusion. Arvind is now contemplating to make a film on epic tale Ramayana in three languages – Telugu, Tamil and Hindi. What’s more the film is going to be made in not just 1 part or 2 parts, but it will be made in 3 parts. This news comes close after SS Rajamouli’s plan to make Mahabharata. The latest reports from the Bollywood media suggests that three producers are coming together for ‘Ramayana’ movie, a 500 crore project. Allu Aravind, Madhu Mantena and Namit Malhotra are jointy producing this mythological movie. 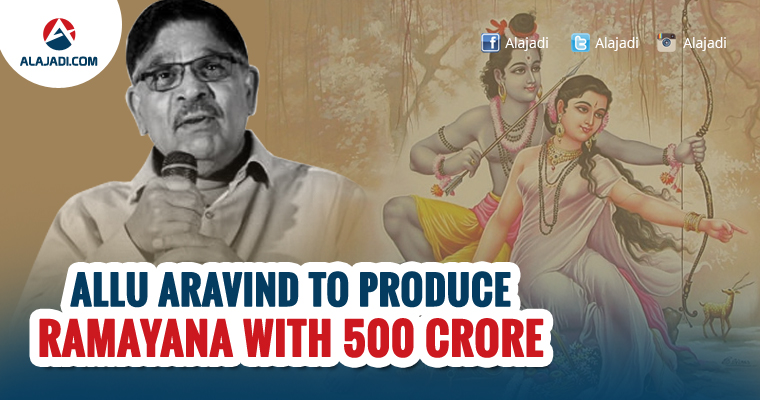 Some opine that the epic Ramayana doesn’t have the required drama and scale to keep the interest of the audience like Mahabharata .. moreover several films have been already made on Ramayana till now.   They are saying that the movie runs one dimensional so it is doubtful to excite present generation audience.  Let us have a look at those arguments.   It’s true that Ramayana doesn’t have the scale and drama  like Mahabharata but..comparatively Ramayana story is simple and there will be no complications involved.  To make Mahabharata,  a filmmaker require many powerful characters.. all the stars can have a place in Mahabharata.. whereas Ramayana revolves around fewer characters.

It has been a long time since Ramayana has been adapted into a film. Arvind felt it’s right time to bring the epic tale onto the big screen, said a source in the know. Aravind reportedly said that It’s a huge responsibility but we should bring Ramayana on to the big screen in the most magnificent way possible. Currently, the team is putting together a terrific team of actors and technicians to make this film on international standards. The shooting is expected to begin in October or November this year. More details about the film will be announced shortly.