After Amala Paul Tollywood Actress Ramba Filed Divorce Petition in Chennai Family Court. Actress Rambha moved to a family court in Chennai hoping to rejoin with her estranged husband Indrakumar. Rambha is married to Indran Pathmanathan, a Canada-based businessman. After the marriage, the actress had settled in Toronto with her husband and began helping him in his business. Rambha married Indrakumar in Saligramam on April 8th, 2010. Indrakumar, a Sri Lankan born, is the founder-chairman of Magickwoods which manufactures kitchen and bathroom related products. The couple has two daughters (5-year old Lavanya and 19-month old Sasha). 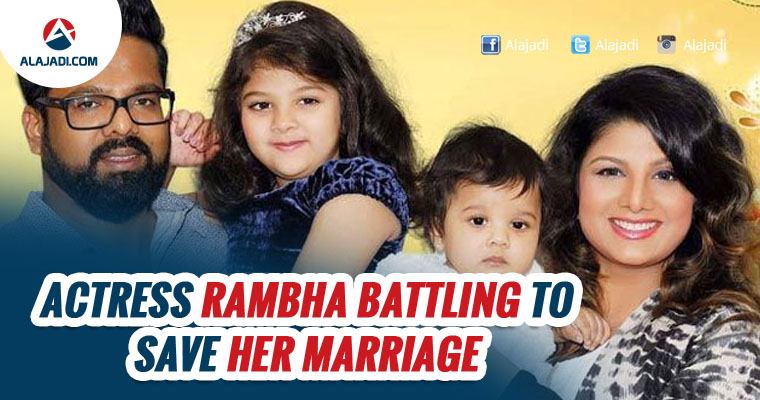 Rambha told Indrakumar has hidden the fact that he was a divorcee by the time he married him. She, however, decided to lead the life of a homemaker and the couple have two daughters. In the petition, Rambha accused Indrakumar of abusing and harassing her to make her transfer all of her properties to him. She even lodged a police complaint in Canada in 2012 over phone. Its then his family members threatened her not to reveal anything to the cops.

Rambha alleges Indrakumar has taken away all of her savings from bank accounts without her consent. She told that the businessman even filed a false case accusing her of trying to take their daughter to India. ‘I never wanted to get separated from my family. Its Indrakumar who is trying to desert Me,’ she added, while approaching the family court for Restitution of Conjugal Rights as per Section 9 of Hindu Marriage Act.

Next hearing of the case has been adjourned to December 3rd, 2016. Judge issued orders asking Indrakumar to appear before the court during the proceedings.