After struggling relentlessly under pouring rain, the NDRF and state police teams have rescued the two-year-old toddler Chandrasekhar from an open bore well in Andhra Pradesh during wee hours on Wednesday. The little boy fell in an open bore well in Ummidivaram village of Vinukonda block in Guntur district while playing in his father’s agricultural fields on Tuesday evening. The boy was stuck at a depth of 15 feet in the well dug by his father two years ago.

Immediately NDRF team has swung into action to bring the boy out safely. A parallel well is being dug. All the while the boy responded to his mother’s calls. Rescuers pumped in oxygen to help the boy survive while trying to retrieve the toddler with the help of a Robotic arm. 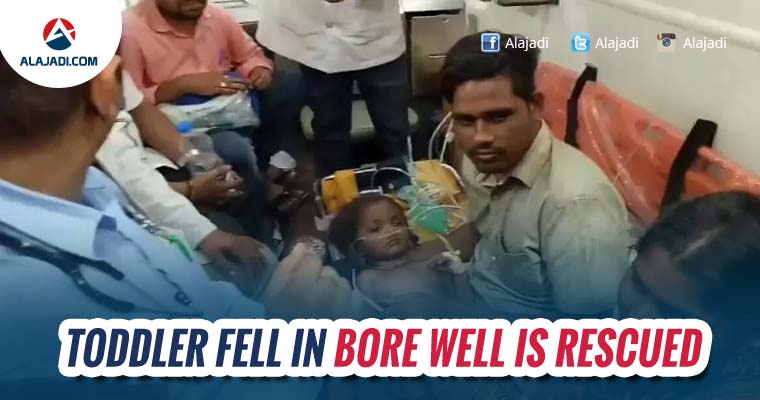 The mission was completed successfully by pulling the boy out from down below unlike conventional methods of lifting the child upwards. Wooden planks were inserted just below the spot where the boy landed so that he will not slip further down like in the case of Chinnari, a 14 months old girl who died under similar circumstances in Rangareddy district of Telangana recently. The boy was sound and safe when pulled out. He was immediately rushed to the Ambulance where he was given oxygen and fluids.

“We are thankful for all the people who participated in the rescue mission and for those who prayed for Chandu’s safety,” Mallikharjun and Anusha, parents of the boy said. Guntur district collector Kona Sasidhar attributed the success of the operation to team work. According to locals, Chandrasekhar was accompanying his mother Anusha, who was working at the cattle shed outside their house. As she was busy feeding the cattle, Chandu was playing around. He slipped into the bore well which was partially covered by a gunny sack.