First Look: Nara Rohith in Kathalo Rajakumari Is Out

The much awaited first look of Nara Rohith from Kathalo Rajakumari is out. As reported by us Rohith is seen in never before seen avatar. Clad in a lungi and sporting a bushy beard, Rohith underwent a massive makeover. With a tagline ‘Love in its best form,’ the poster looks promising and some interesting stuff to look forward to. Mahesh Surapaneni is making his debut directorial while the film is jointly produced by Krishna Vijay, Prashanthi and Soundarya Narra. Maestro Ilayaraaja and Vishal Chandra Shekar have composed the music. Naresh Kancharana handled the camera. 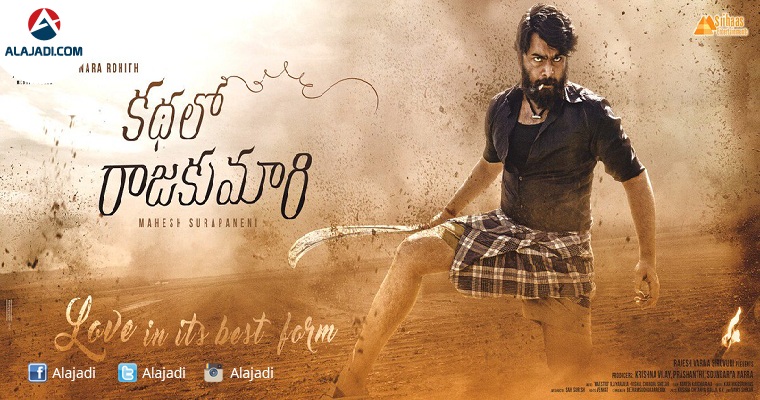 Kathalo Rajakumari makers unveiled first look poster as Valentines Day Special to announce that this movie is going to be a romantic entertainer. Seems like, Rohit went for complete makeover for the film. Draped in blue shirt and galla lungi, the Prathinidhi star appears massy with unusual hair style and thick beard. For the first time in his career, Nara Rohit has essayed a complete mass role. Namita Pramod is female lead opposite Rohit in the film directed by Mahesh Surapaneni. Irrespective of results, Rohit is trying different films. Let’s see how his new experimental film performs at box office, after it hits the screens!

Whenever Nara Rohit is teaming up with a young hero for a multistarrer film, he is attaining a hit. His last films Jyo Acyutananda and Appatlo Okadundevadu, for which he worked with Naga Shourya and Sree Vishnu respectively, were critically acclaimed and commercially successful films. This time for his new film Kathalo Rajakumari, Rohit is sharing screen space with Naga Shourya and Srinivas Avasarala is other lead actor.