Tossing coins into a fountain to bring good luck is a popular superstition, but the practice brought misery to a sea turtle in Thailand from which vets have removed 915 coins. For the last two months, Omsin a 25 year old female sea turtle in Thailand was finding it strenuous to swim. Despite being on a diet of good luck, coins were bringing misery to her life. Omsin, which means Piggy Bank in Thai, lives in a lake in Sriracha conservation center, east of Bangkok. The locals and tourists would come to the conservation center and throw coins in the lake hoping to be blessed with good fortune. However, they didn’t have any idea that Omsin was slowly swallowing the coins that were tossed into the lake. 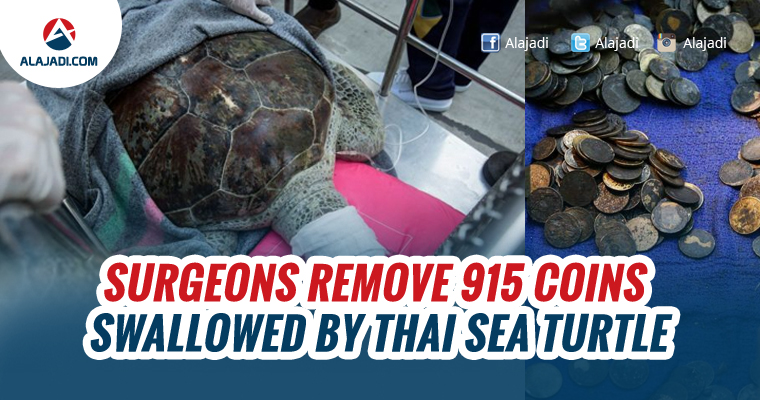 Vets in Bangkok operated on Monday on the 25-year-old female green sea turtle nicknamed Bank, whose indigestible diet was the result of tourists seeking good fortune by tossing coins into her pool over many years in the eastern town of Sri Racha. Many Thais believe that throwing coins on turtles will bring longevity. But the coins eventually formed a 5 kg ball in Bank’s stomach. The weight cracked her ventral shell, causing a life-threatening infection. The weight had cracked Omsin’s ventral shell, causing a life-threatening infection. The ball of coins formed inside her stomach was too big to take out. So it had to be removed few coins at a time after making a 10 cm incision.

Bank was brought to the vets by the navy, which found her ailing in her seaside hometown. It was only after a 3D scan that vets discovered the problem. As well as the coins they found two fish hooks, which were also removed. The surgery team leader said that when she discovered the cause of the turtle’s agony she was furious. Her operation was conducted using the money raised from a public donation of 15,000 baht (approximately Rs 28,416).

This story is an example of how human behavior is affecting the wildlife around us. Practices like these are prevalent across the world. From coins to plastics, humans throw objects in water sometimes to bring good luck, and most of the times, without understanding the original reason for the practice. Omsin, in this case, was lucky to have been found by the Navy. There are hundreds of Omsins around the world. Let us stop polluting and endeavor to save their habitats.