Speculations of Varun Sandesh’s Wife Vithika Sheru suicide attempt has stunned the Telugu Film Industry. Within hours these rumours were proven wrong with the clarification issued by the Actress on her Twitter handle. Actually, How did such wild rumours surface?  Actor Varun Sandesh’s wife and actress Vitika Sheru had attempted suicide and was ‘undergoing treatment’ at a private hospital in Hyderabad. In no time, the rumour spread among media, film circuits triggering a kinda panic. 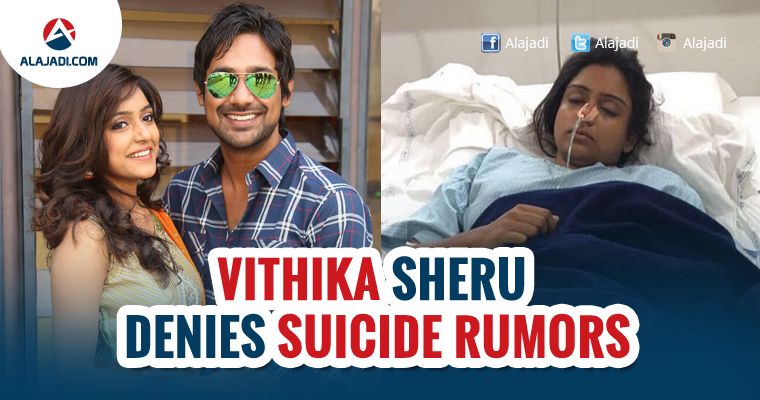 Only recently Vithika returned from the USA, completing her three months of a super happy trip with the hero, husband Varun Sandesh and family. Like many, Vithika too faced issues with climate change and immediately got attacked with food poison and lack of sleep due to time-zone shift and jet lag. Worried about the sleep depravity, Vithika consulted a doctor and took some sleeping pills upon an advice.

And on Monday morning when Vithika was not waking up from her sleep, her parents got worried and took her to Star Hospitals. “Maybe if they have waited for two more hours, I would have woke up by myself. But as they are worried, they took me to Star Hospitals and even doctors tried to wake me up through some methods. Who on earth would take only four sleeping-pills to commit suicide? There is nothing such” says Vithika Sheru in the live to the news channels.

“Within a month, our 1st anniversary is arriving and we’re looking forward to celebrating it at the newest destination,” said Vithika, on a concluding note.