Intolerance issue in Bollywood, India is growing to new heights day by day. At the beginning people who believed that the intolerance is increasing in the country are never directly involved in name saying or never attacked any politician directly. They just attacked government decisions and strategies. When this issue is taken up by political parties then the movement against increasing intolerance took another route as opposition directly attacking the Prime minister Modi and BJP leaders. Some Bollywood stars, who are nothing to do with the Intolerance put their hands in this mud and facing tough questions from Pro government Bollywood co-stars.

Aamir khan, one of the Biggest Bollywood actor expressed his opinion on increasing intolerance in India by saying ” He and his wife Kiran are thought about leaving India as they worried for their kids and situation in India”. This statement might be his personal but it has given a lot of media coverage and hype. In satirical way his Bollywood co-star Anupam Kher responds to Aamir comments and asked few more straight forward questions in Twitter, which can be found here. 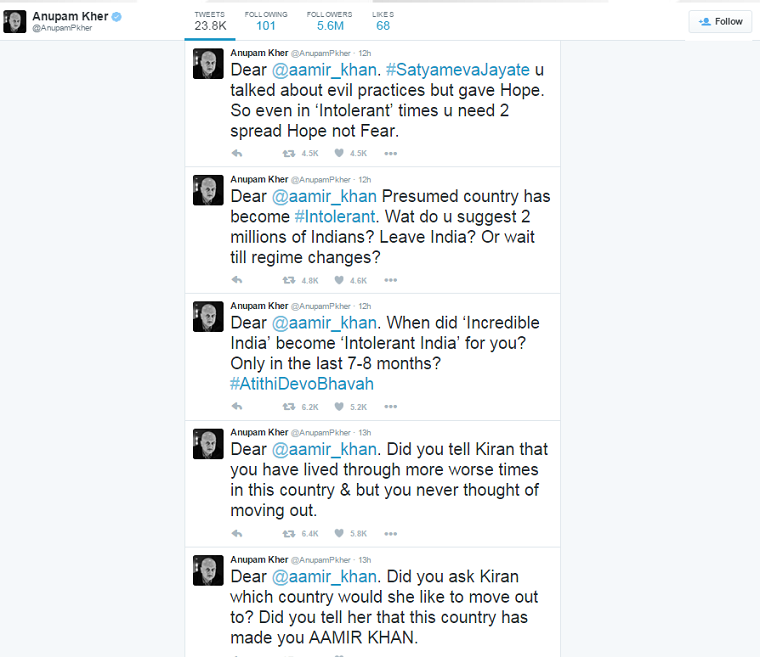 Anupam questions indirectly, “how can Aamir as being a muslim can became a Bollywood super star in Intolerant India?”. We need to wait and see, whether Aamir will respond to Anupam tweets or not?