In what would be considered as a sheer inhuman gesture, Telangana minister of tribal welfare Azmeera Chandulal on Monday indifferently drove past the body of a road accident victim in Jayashankar Bhupalapally district. After a photograph of the incident gone viral on social media and invited wrath from citizens, the minister has come up with justification that he was in a “hurry”. 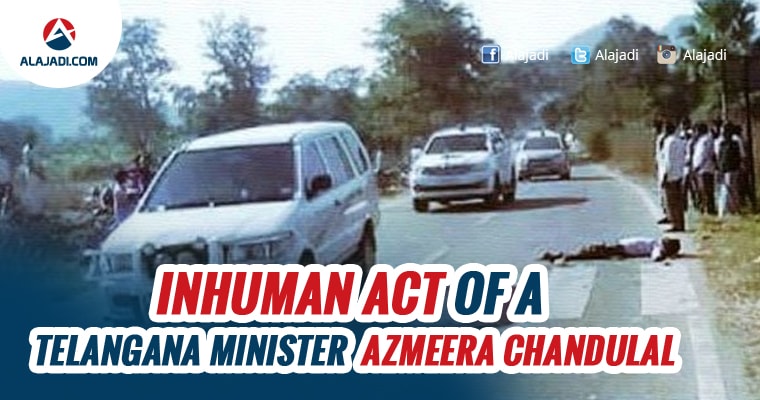 The accident happened when a youth Taduri Madhusudhana Chary was travelling to Ramappa temple along with his two friends Gopi and Sateesh as a Tata Ace truck rammed into a motorcycle. Chary (30) died on the spot and the two friends escaped with injuries even as the truck sped away. When nearby villagers gathered on the spot and were looking for a vehicle to shift Chary’s body and the injured to a hospital.

Not only did the truck speed away after the accident but while Chary was lying bleeding on the road, he was even ignored by the Minister Azmeera Chandulal who noted the accident but chose to speed off followed by his entire convoy of vehicles. It was only after the entire convoy had passed that the cops came in to the aid of the victims but alas too late as Chary was already dead. The Minister claimed it was not an inhuman act on his part. He stated that he was on his way to Palampet to see a relative who was in a critical condition.

However, this does not absolve him of his duty towards a dying man. He could very well have stopped his car and made some arrangements for the dead victim along with his injured friends but his only line of defense for this inhuman act towards people from his own constituency, is that he was ‘in a hurry’.

When the government is trying everything possible to make the people of this country understand the fact that helping accident victims on road is of utmost importance, the example set by the said minister is highly wrong.