Do you remember that monogrammed suit Prime Minister Narendra Modi wore while meeting United States President Barack Obama in January in New Delhi? Well, that tailored suit is now the ‘most expensive suit sold ever’, said the Guinness World Records. 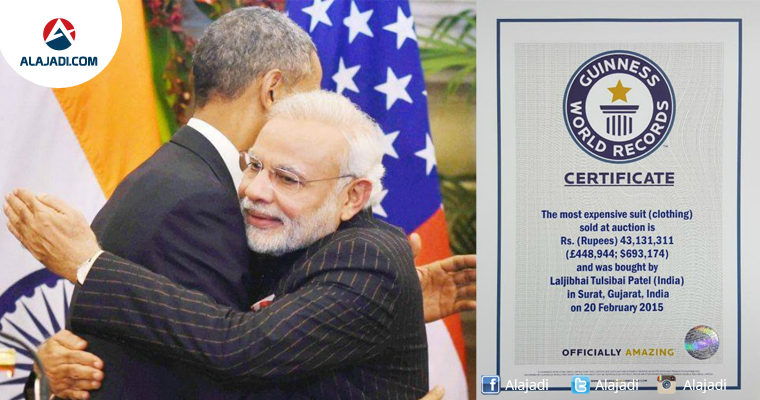 The final auction price was an extraordinary figure, given that it reportedly cost only Rs 10 lakh to make, and was given a base auction price of Rs 11 lakh. “It is a matter of happiness and pride that the suit has found a place in the Guinness Book of World Records. The suit which had Modi’s named tailored into it in gold pinstripes was later sold to the highest bidder, Laljibhai Patel, a diamond baron and private airline owner based in Surat, Gujarat for an astounding Rs 4.31 crore.

The Guinness World Records acknowledges the suit as the “most expensive suit (clothing) sold at auction is Rs 43,131,311 and was bought by Laljibhai Tulsibhai Patel (India) in Surat, Gujarat, India on February 20, 2015.”

Last year, PM Modi’s monogrammed, pinstriped, ‘bandhgala’ suit made headlines because of a very specific sartorial feature – its stripes were made of repetitions of a single motif: the Prime Minister’s name, Narendra Damodardas Modi. It was stitched by Jade Blue, an Ahmedabad-based garments chain.