State Bank of India (SBI), the country’s largest public sector lender, has initiated a clean-up of its balance sheets by writing off loans worth Rs 7,106 owed to it by as many as 63 willful defaulters. The decision comes a week after government announced demonetization of large currency bills to target black money hoarders across the nation. The move has seen millions queue of outside banks and ATM’s to have their money replaced. 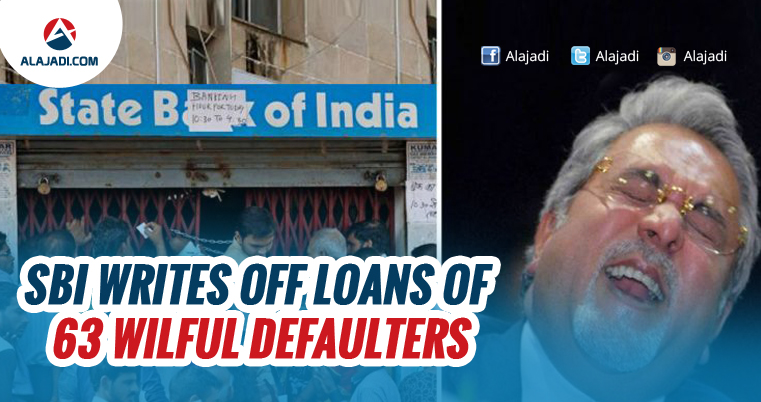 The move saw the bank write off almost Rs 1,201 crore owed to it by Vijay Mallya’s Kingfisher Airlines, which tops the list of willful defaulters. Other prominent defaulters on the write-off list are KS Oil (Rs 596 crore), Surya Pharmaceuticals (Rs 526 crore), GET Power (Rs 400 crore) and SAI Info System (Rs 376 crore). Former Rajya Sabha MP Vijay Mallya left India in March,  when his arrest looked imminent over the financial fraud. He has been declared a proclaimed offender. His defunct Kingfisher Airlines owes a total of Rs. 6,963 crore to  17 banks. His Goa villa was auctioned last month by the banks, but was unable to fetch a buyer. 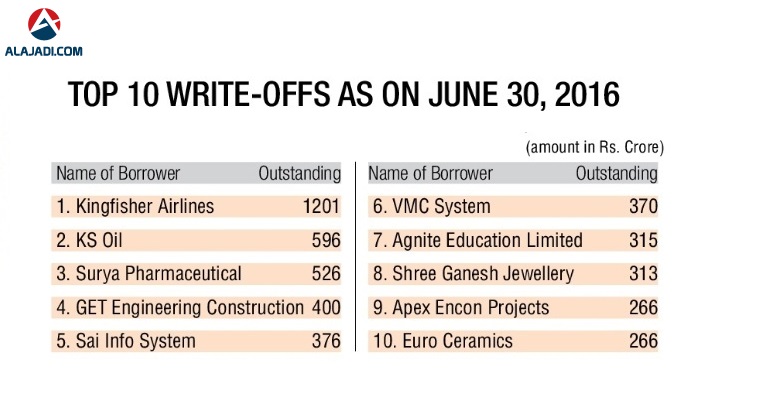 Documents assessed by DNA reveal that 63 accounts have been fully written off, 31 partially written off and six have been been shown as non-performing assets (NPAs). The report also suggests that SBI has categorized the loans (mostly willfully defaulted) chucked off its balance sheets as Advance Under Collection Account(AUCA).

Banks exercising write-offs is a unique idea to clear bad loan impacts on balance sheets. Banks use the RBI approved tool, Advance Under Collection Accounts (AUCA), in which transfer of accounts to a specific AUCA is an NPA reduction strategy. It is resorted to after exhausting all avenues of recovery, restructuring and compromises. By writing-off bad and doubtful assets, banks can improve NPA ratios through cleansing of the balance sheet and tax benefits. All write-offs, except where one-time settlement or compromises are involved, irrespective of outstanding, should be treated as technical write-offs and parked in AUCA; recovery process of these accounts will continue till resolution of these accounts.