Comedian Sapthagiri first debut Telugu movie as a hero is Saptagiri Express and this was successfully released worldwide in all the theaters on 23rd of December. From many days people are waiting to see his flick and now their dreams come true through this film. This comedy entertaining movie was directed by Arun Pawar and bankrolled by Dr. K. Ravi Kirane in the production banner of  Sai Celluloid Cinematic Creations. 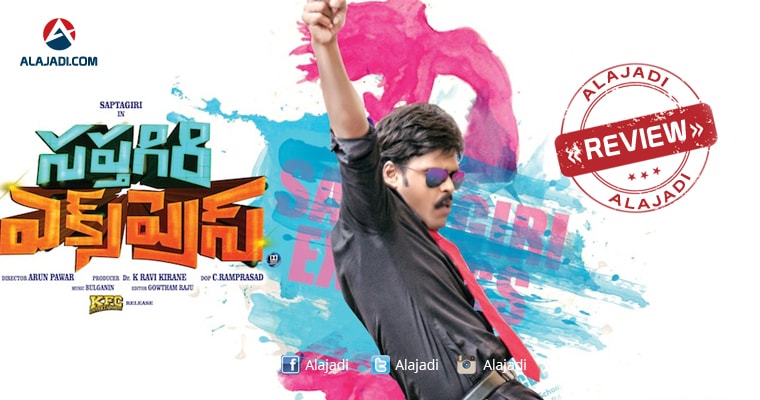 The film is an emotional story that focuses on the bond between a father and son. The film starts on the conflict between a disciplinarian father and his wayward son. The sub Inspector family shifted to the same colony. He meets Aishwarya Inspector’s daughter and fell love with her. The rest of the story is how sapthagiri becomes from a reluctant cop to a disciplined guy, who takes revenge against those who murdered his father. He also goes through an emotional upheaval when he realizes the goodness in his father who he hated during his life time.

Saptagiri Express Movie Story line is quite interesting with comedy and love story so everyone is curiously waiting to see the film. The young comedian not only showed his comic talent but also used plenty of space to exhibit his dancing skills. Initially titled Katuma Rayuda, which was changed after Pawan and Sapthagiri learned that Pawan Kalyan was directing a film by the same name.The film got huge hype after Power Star Pawan Kalyan released the audio of the film. In the makers are leaving no stone unturned in promoting the movie.

Saptagiri: Not only his comic talent his acting skills were are also good as hero.

Roshini Prakash: She is good for role.

The movie successfully completed it’s censor formalities and got clean ‘U/A’ certificate from the censor board. So family audience can watch this film along with your children’s. Major part of the shooting is done in Hyderabad and Poland which looks apt. Dialogue expert Trivikram’s close aide Arun Pawar helm’ed the megaphone to this venture.