PVSindhu‬ arrives to a rousing welcome in Hyderabad

Olympic silver medalist PV Sindhu and her coach P Gopichand were on Monday morning given a grand welcome on their arrival in Hyderabad from Brazil, where thousands of people have gathered to greet her. Sindhu, along with her coach Pullela Gopichand, landed at Rajiv Gandhi International Airport at Shamshabad on the outskirts at around 9.20 am. Top politicians and others jostled to present flowers and shawls and click selfies with the first Indian woman to win a silver medal at the Rio 2016 Olympics Games. 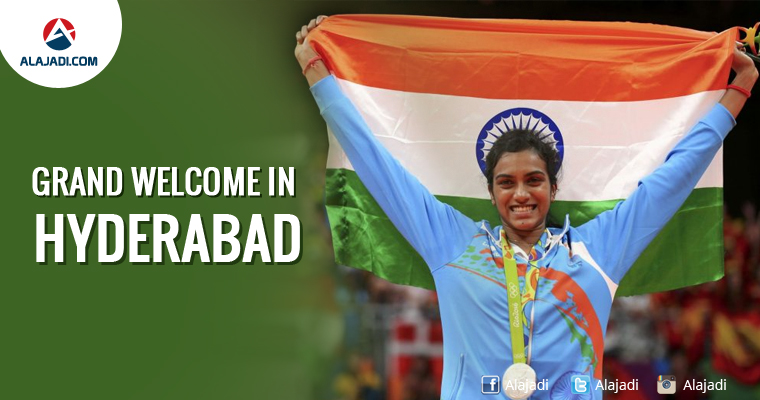 A special open Double-Decker bus has been commissioned by the Telangana government all the way from Mumbai, on which the badminton ace is travelling in a victory rally to a city stadium. This will be followed by a rally in an open-top-motorcade towards Gachibowli stadium where the ace shuttler will be felicitated.

According to GHMC commissioner B. Janardhan Reddy, “the star shuttler will be welcomed by school children and citizens at various points from airport to the stadium”. He directed other officials to install huge hoardings along the procession route to welcome the girl, who made our country proud.

Telangana government had on Saturday announced of Rs 5 crore cash reward to Sindhu, a 1,000 square yard housing site near the P Gopichand Badminton Academy in Gachibowli and suitable government job, if she is willing to do.