NDTV One day ban on Over Pathankot Reportage

A leading Hindi news channel was on Thursday ordered by the government to be taken off air for a day after an inter-ministerial panel constituted by I&B ministry recommended this action over the broadcaster’s coverage of the Pathankot terror attack in January. 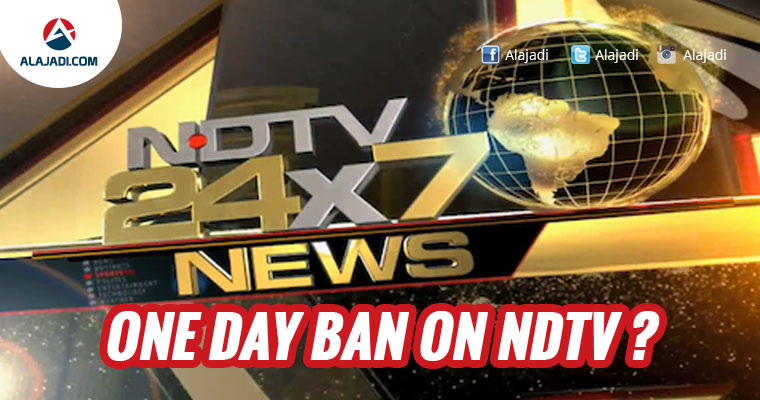 This is the first time that a broadcaster has been penalized over coverage of a terror attack. According to the information and broadcasting ministry order, the channel’s anchor and reporter had revealed sensitive information during the coverage of the attack that could have been readily picked up by terrorists hiding in the airbase and their handlers had the potential to “cause massive harm not only to national security but also to the lives of civilians and defense personnel”. The channel has denied the charge, claiming that it has been singled out.

The Information and Broadcasting ministry while invoking the powers under the Cable TV Networks (Regulation) Act said it “orders to prohibit the transmission or re-transmission of NDTV India channel for one day on any platform throughout India with effect from 00:01 hrs on 9th November,2016 till 00:01 hrs of 10th November, 2016”. NDTV has revealed strategically sensitive information during its report on the attacks that could have compromised the national security as well as endangered the lives of civilians and army personnel.

The panel said that the channel had given the location of an ammunition depot, a school and residential premises vis-a-vis the space where the terrorists were holed up and recommended that the channel be taken off air for 30 days as penalty for causing “threat to national security”. It later restricted the ban period to a day.